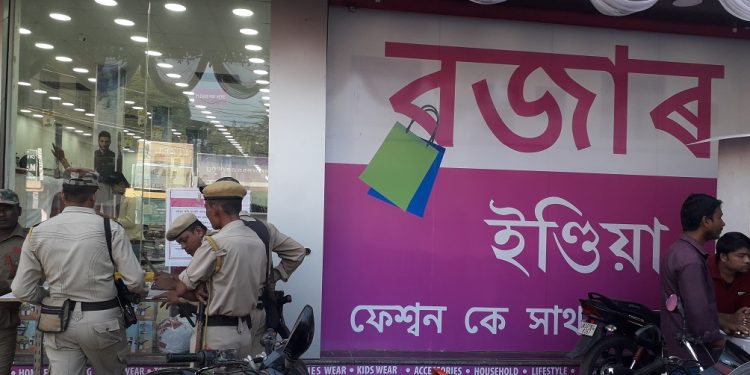 Much to the relief of the pedestrians and common customers of Mangaldai town in Darrang district of Assam who often used to suffer traffic congestion and hazy, noisy atmosphere due to some unauthorized commercial establishments, Darrang district administration in a bold and courageous step on Wednesday stopped trading at the retail outlet ‘Bazar India‘ located at LNB road and also sealed the multi-storey premises for an indefinite period.

Earlier, on September 27 last, the management of the business establishment had started its functioning without fulfilling the above mentioned requisite norms inviting show cause notice from the municipal authority on that very date.

Dipsikha Saikia, Circle Officer of Mangaldai on behalf of the district administration at around 3 pm sealed the mega business centre in presence of officer in charge of Mangaldai police station Niranjan Baruah and authorized officials of Mangaldai Municipal Board including its assistant executive engineer Amulya Saharia among others.

In another incident on the day, the administration vacated the ‘varanda’ in front of Matri Bastralaya, a leading clothes house of the Mangaldai bazaar from their unauthorized occupation for several years causing serious harassment to the commuters.