For hundreds and thousands of students in Assam like Asadullah, Fulesa, Habibur, Mamtaz, Nisam etc of Nadirpar Uttar Lower Primary School in Darrang district, the recent summer vacation did not pass on a good note as flood wreaked havoc destroying their homes, schools and displacing them.

Flood severely damaged various schools and educational institutions around the state, leaving a trail of a never-ending tale of destruction and posing a question mark over their academic future.

Dreams of the eighty-seven students of Nadirpar Uttar LPS to resume their regular classes in the existing permanent building of the school seemed like shattered after the surging water of Dhansiri suddenly changed its normal course and eroded the school building away.

The incident occurred right in front of the very eyes of the helpless students, teachers, and guardians as the river changed its course by 100 metres and took the building away.

Even as the cloud of uncertainty hovers their future, however, much to be the delight of the students of the school the District Elementary Education Officer (DEEO) assured regular classes from Thursday in makeshift temporary arrangements. 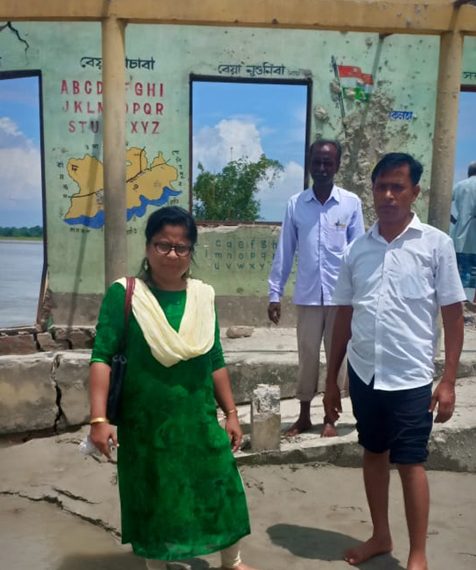 Talking to the Northeast Now, Darrang DEEO Dr Jowahira Tabossom said that the department, along with help from the locals are now ready to start classes after the completion of summer vacation in a temporary set up.

“We will carry on the regular classes in a temporary set up in the nearby campus,” Tabossom said.

Regarding rebuilding of the permanent structure, the DEEO said, “We have already sent a special proposal to the government for a new building in place of the fully damaged property.”