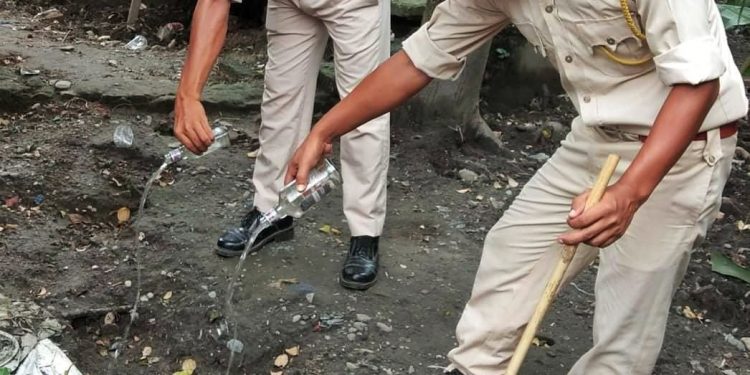 Liquor being destroyed during raids in breweries in Tangla

The department swung into action after government reports indicated that Covid-19 could spread from people visiting the country liquor breweries.

A total of 410 litres of fermented wash, 115 litres of illicitly distilled liquor and four distillation equipment were seized and destroyed.

Sources said illicit country liquor traditionally involves fermenting molasses and breaking it down to ethyl alcohol, or ethanol, and carbon dioxide at a controlled temperature.

The ongoing Covid-19 pandemic that has badly affected the livelihood of several sections of people, turned out to be a boon for liquor brewers in Assam as they earned good money by brewing country liquor.

The Assam excise department has earned more than Rs 69 crores in revenue in May-June this year, which is a 60 per cent increase compared to the same period in 2020.

Sources said illicit country liquor traditionally involves fermenting molasses and breaking it down to ethyl alcohol, or ethanol, and carbon dioxide at a controlled temperature.

A process of distillation over firewood yielded the clear, pungent liquor with alcohol content of up to 45%.

Notably the country liquor goes through the same manufacturing process and is distilled from the same agricultural source (molasses). The differences are in strength (the percentage of alcohol) and flavours.