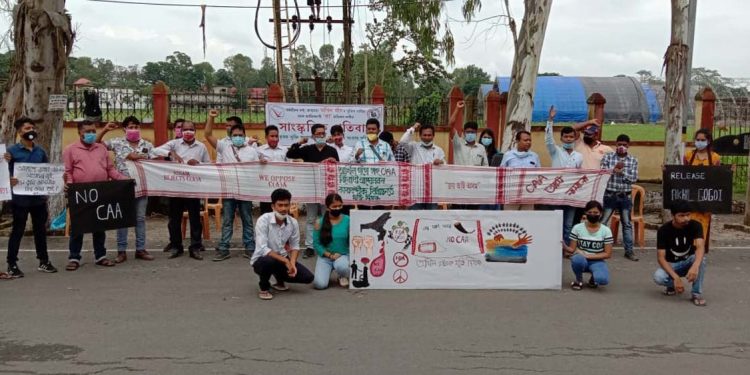 Akhil Gogoi was arrested in Jorhat last December and charged by the National Investigation Agency (NIA) under the stringent UAPA.

He was accused of ‘seditious’ activities which included ‘waging war’ against the nation for their alleged ‘incitement’ to violence during the anti-CAA protests that had engulfed Assam last winter.

Akhil Gogoi is yet to be released and is undergoing treatment for Covid19 infection in Guwahati.

Senior citizens and intellectuals also participated in the protest with the singing of songs, recital of poems and drawings.

KMSS secretary Arindam Gogoi delivered a lecture condemning the anti-Assam stand of the present governments at the Centre and state in passing the Citizenship Amendment Bill 2016 without properly debating on the pros and cons of CAA.

The protestors carrying banners and shouting slogans warned that such protests would continue till Akhil Gogoi is not released and the Act scrapped.