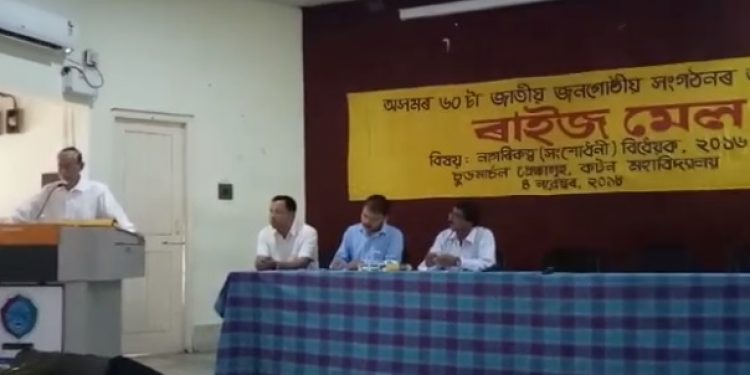 Dr Hiren Gohain at the pubic meet on Citizenship (Amendment) at Sudmerson Hall of Cotton College in Guwahati on November 4, 2018. Photo: Northeast Now

It was Thursday evening, Dr Hiren Gohain, the eminent public intellectual called me to know my views on an article which appeared in an Assamese daily the same day.

While discussing the article, he also wanted to know my views on the present situation in Assam. I said, “Sir, it is very disturbing that some people are trying to create troubles between Assamese and Bengali communities.”

He replied, “Do you think common people are worried about this and exercised over it?”

I said, “No sir, I don’t think so. I feel the tension when I see the television and read the morning newspapers.”

He said, “That is true. So far they haven’t been able to motivate the ordinary people. But, if somehow they could get some innocent people killed somewhere, the situation may turn volatile.”

We had this discussion on the phone in the early evening and at 9:25 pm, Santanu Borthakur, my advocate friend called me and asked: Dada, have you heard the big news?

I asked: No, nothing! Why what happened?

“Five Bengali persons are killed in Dhola Sadia a little while ago. I think, Axom Nagarik Samaj must immediately do something about it.”

I was shocked to my bones. What a premonition? But, we often fail to see that a premonition is also contextual. The way things were brewing up in Assam for last couple of months, it was quite natural to apprehend some incidents of this type.

But, there is a difference between an apprehension and a real happenstance.

Killing of five innocent people, just because they belonged to a particular linguistic community! How does it sound? It sounds awesome, absurd and medieval. I have no words to condemn this. How will an ordinary Bengali man or woman view this? Will he or she not feel threatened personally? How shameful and dehumanizing is this!

But, believe it or not, this is the global trend now. What are the major tensions the world over these days? These are nothing, but racial, ethnic, religious, and communal rifts and tensions.

The most loathsome thing is – this is happening here in Assam, just before our eyes and we are witness to its spread.

For last five decades, the most dominant narrative in Assam has been the identity politics. There is a genuine existential fear among the community of Assamese people because of the longstanding influx problem.

What has happened is only politics is being played on this and nothing worthwhile has been done to safeguard the existential fear of the community.

Further, the politics on this issue has ignored the class question among different linguistic and religious communities living in the State and often turned undemocratic.

We tend to forget that among different communities there are poor and rich people and these poor, rich categories transcend communitarian boundaries and offer a common class character to them.

The identity politics rarely, very rarely takes cognizance of this common character which helps the ruling clique and powers that be to perpetrate their rule.

Various organizations in Assam have been agitating for past one year or so for the repeal of the proposed 2016 amendment bill to the Citizenship Act of 1955 and also demanding a speedy update of the NRC.

The BJP governments at the Centre and the state surely don’t want to do this because they are the ones who proposed the amendment.

They are also not happy with the updating of the NRC, though they cannot stop the process which is being done under the supervision of the Supreme Court of India.

We have seen how both the Central and the State governments are trying to defuse the movement against the citizenship bill with the help of their Hindutva outfits. Under the circumstances, how will the incident in Dhola affect the ongoing movement? Of course it will badly affect it. Who will benefit from this incident? Surely the government and the outfits supporting the government. Then who could be behind this incident? When the ULFA(I) has denied their involvement in it who should we point our finger at for the crime? Do we need to state this obviously?The corollaries are explicit. That means the incident could be the result of a design and not a whimsical and emotional outburst.

In this murky situation, the government can do one thing. It can swiftly apprehend the killers and prove all our guess and corollaries wrong. That will be the happiest thing because what is more important than truth? What we want is the truth and appropriate punishment to the perpetrators of the crime and adequate compensation to the families of the dead.

In the present circumstances, what the organizations which are agitating for the repeal of the Citizenship (Amendment) Bill, 2016 and also for a speedy update of the NRC should do?

These organizations must be careful in their acts and words.

Assamese is a composite community. The vested interests have already done enough harm to this composite fabric of our community. We must not allow them to erode it further.

Again, let us be clear on one thing. The Bengali community, particularly in Brahmaputra valley is so intricately involved in our social life that it is impossible and foolhardy to try to separate them from us.

The foreign national issue and the NRC are all about dates and years, not about any community. And, we should never ignore the democratic process and humanitarian concerns.