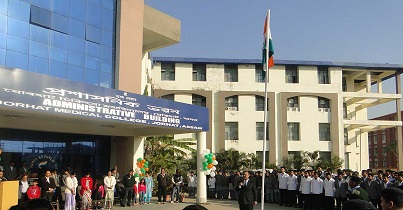 Ace neurosurgeon Amrit Kumar Saikia of the Jorhat Medical College and Hospital (JMCH) here has performed two surgeries, one of them being the first in the State.

One of the surgeries involved brain mapping and the other which was performed on Thursday was with the help of computer aided navigation.

Saikia said that the craniovertebral surgery performed on Thursday on Raju Regon, a 38 year old patient, was a delicate procedure and that if not done could have left the patient paralyzed or even dead as it would have affected the respiratory system.

“He fell down and broke the second cervical vertebrae which is linked to the one broken by the noose while being hanged to death. Though it is performed in hospitals outside the State, it has not been performed here,”  Saikia said.

Dr Saikia operated on the patient with the aid of a computer.

He further said that the cost of the operation went up to lakhs outside but since the man was covered by the Atal Amrit Abhiyan insurance scheme, the cost was covered here.

In the other operation, conducted about 10 days ago, he did an intra-operative neurophysiology monitoring of the brain, in other words brain mapping so that the important parts of the brain which regulated the major systems of the human body were bypassed while taking out a tumour.

The tumour was found to be cancerous so the patient has been sent for radiotherapy.

State Health minister Himanta Biswa Sarma in a tweet has congratulated the feat of Saikia and his team in successfully operating on Regon.

My compliments to Dr Saikia and his team for this feat. pic.twitter.com/0u6hJoKVue