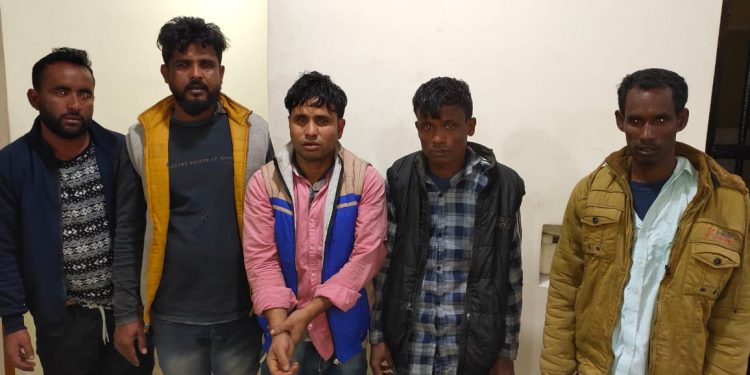 The notorious gang was involved in dozens of cases of cattle lifting, looting of ATM booths and business establishments.

The police team gave them a chase after they attempted to flee ignoring police signal.

The police recovered one bull and two cows loaded inside an Ertiga car bearing registration AS-01-LC-2380.

Half a dozen of equipment used in cutting of locks, shutters including knives, wire cutters, iron bars etc have also been seized from their possession.

The accused during their preliminary interrogation have confessed before police that they were already involved in lifting of more than forty numbers of livestock from Darrang alone apart from looting ATM booths, shops and business establishments in different parts of the State.

Police on Saturday produced all the accused who hail from Hajo and Nalbari areas before the court requesting their seven days police custody to collect more information after booking them under several sections of the IPC including cruelty against animals.

“We have moved the court for seven days police custody of arrested persons as we are expecting more vital information during further interrogation and also regarding the other absconding members of the notorious gang,” said Baruah while talking to Northeast Now on Saturday afternoon.