Assam has always been home to diverse sections of society. A number of religious, ethnic, linguistic and racial groups find their home in Assam.

From time to time, different groups have come to the land and settled down, assimilating themselves with greater Assamese culture, while lending a little bit and borrowing a little too.

For example, Ahoms came in 13th century, while tea tribes were brought during colonial period.

This makes Assam an inherently diverse society, in which everybody is a minority in one way or other.

The history of the State shows that there has been no communal violence in the State over the centuries, accept the lone incident of Assam movement in which thousands of Muslims were massacred, although the main plank of the movement was against the foreigners, particularly Bengali infiltrators.

Because, Bengalis were often tagged as lungi wearing, they became easy victims.

Other than that, there is no tinge of evidence to call it communal.

BJP at Centre as well as the State are aware of this secular nature of the State. It ifs well stipulated that the same rhetoric of communal violence that works in UP and other central Indian states are not going to work in the north-eastern state.

The BJP has been long trying to make foray into the north-eastern states. But, this time fortune has kissed on shoulder.

BJP has now formed governments in a number of north-eastern states, after winning Assam.

It is noteworthy that BJP has won the election by holding on to the old but emotional chord of Assamese identity, which has always been a ticklish issue with Assamese people.

The catchy phrase of ‘Jati, Mati, Bheti’ had struck an emotional chord with the indigenous people and had won votes. BJP’s communal ploy would not have worked here to make it to the win for the first time.

But, BJP is toothless without communalism.  For a long term sustenance, communal Polarization is a master move for BJP. Because, as soon as the NRC gets over, there will be no question of protection of ‘jati, mati, bheti’ or indigenous culture.

But, religion will always remain. To keep the debate alive, pitting the majority Assamese speaking Hindus with minority Bengali speaking Muslims is the most convenient ploy in the present circumstances.

This is the only path to polarize the otherwise harmonious society. 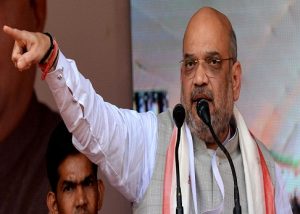 And BJP’s Amit Shah is always good in this. While the National Register of Citizens (NRC) is in work under the honourable Supreme Court, the BJP has almost hijacked the credit of NRC progress.

Of course, the BJP government is in support of the NRC and had extended all support. However, it does not make the party the sole credit deserving authority.

While the party supports the enactment of the NRC; however, it does not do the same without a twist.

While on the one hand, the Supreme Court guided NRC work is going on to eliminate the fear of illegal foreign immigrants; on the other hand, the BJP is putting effort to bring in Citizenship (Amendment ) Bill, 2016.

The Bill tries to invoke a sentiment of religious affinity as the BJP projects India as a natural home for Hindus. Where will they go, if they are persecuted in a neighbouring country?

More than logic, there is emotional appeal in this rhetoric. Had the BJP been concerned about persecution, they would have welcomed the Rohingyas with equal ease because they are also persecuted lot.

The state unit of the party should, at least, have understood the clever scheme of the national BJP. But unfortunately, the state unit has more or less given to the vicious design.

In a recent interview to a television channel, when Himanta Biswa Sarma was asked about his stand vis-a-viz Citizenship (Amendment ) Bill, 2016; he replied,” Our standpoint is clear. The plank is that the Assamese community has to survive. We need to find out who the enemy of this community. Completion of NRC will clear that. Without knowing who the enemy of the community, how can I say whether I support or oppose the Bill?”

This is mind-boggling. What does the Minister wants to say. What if majority who cannot make it to NRC are Muslims? He would oppose or support the Bill?

Similarly, what if majority who cannot make it to NRC? Will he oppose or support in this case? Well, who is an enemy to Assamese community for Sharma – an illegal Bangladeshi infiltrator or a Muslim infiltrator? He has to decide.

Such deceitful manoeuvring is dangerous. There are a few other law-makers from the party who have time and again taken stand against the Muslims.

Hozai MLA, Shiladitya Dev often identifies Muslims as Bangladeshi, projecting himself as a protector of Hindus.

Thus, religion is no more distant in so far as the identity politics of Assam is concerned. The question of religion as somehow got assiduously entangled with the question of ethno-cultural identity.

No more the state can claim secularity like heyday. The milieu is charged with chameleon politics of central Indian plain. The communalization is complete.

Perhaps, in the run up to the 2021 Assembly election, this Machiavellian scheme would be employed. Better that the Assamese community understands it sooner and get themselves away from the tentacles of monsters like communalism.

Mokhjumi Ahmed is a post-graduate student of Sociology in Gauhati University. He can be reached at: [email protected]