Assam: High on patriotism bikers take out Freedom Ride on I-Day in Udalguri 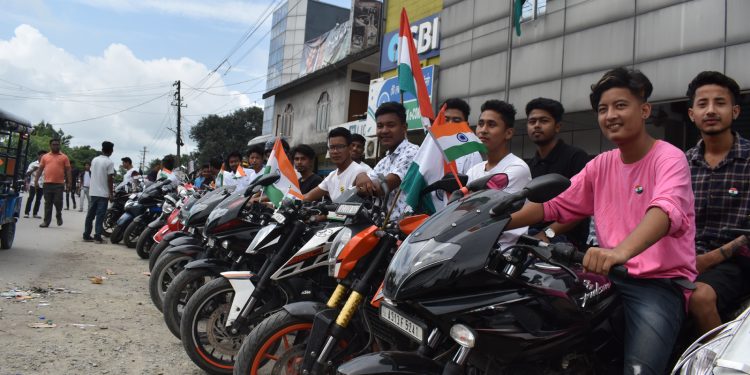 A group of youths took out a bike rally in Tangla town of Udalgurir district in Assam on Thursday on the occasion of 73rd Independence Day.

The group, under the banner of Tangla Bikers, rode motorcycles with flags tied to the front of the bikes and enthusiastically took part in the Freedom Ride, which began from Tangla town and culminated at picturesque Paneri Tea Estate.

“I usually don’t wake up early but today its a special day for us as we celebrate the spirit of unity in diversity,” says Diganta Brahma, a participant of the rally.

This is the first time that a bike rally has been organised on the occasion of Independence Day, even though rallies have been held in the past.

“We bikers thought why not also ride on Independence Day because we are as enthusiastic about our freedom as about bike rides,” says Wajid Khan, another participant.

Another participant, Dibyo Jyoti Medhi, says that the basic idea of organising the ride was to make that people know that Independence Day is a day to be celebrated with fun and gaiety.

“Independence Day is not just like another holiday where people stay indoors and sleep. But it is a day to come out and celebrate,” says Dulal Rabha, another bike enthusiast.

“This is our first ride on Independence day, and the number of participants crossed 40,” he further adds.

He further says that for bike enthusiasts, biking is the best way to express their love for the country and salute those who sacrificed for the freedom of the nation.