The Hailakandi district administration has served show cause notice to Blue Flowers English Medium Higher Secondary School for allowing minor children to take part in a road blockade at Rabindra Saranii in Hailakandi town on Tuesday. 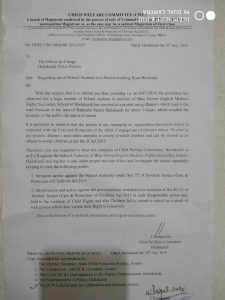 Deputy Commissioner, Keerthi Jalli has served show cause notice to the principal of the school to explain as to why stern action should not be initiated against him for allowing a large number of minor school students in uniform to resort to road blockade in gross violation of the Right to Education Act 2009 and other existing laws.

The school authorities have been given 48 hours time to reply to the show cause failing which stern action would be initiated that include cancellation of permission to run the school.

On Wednesday, the chairperson, Child Welfare Society, Hailakandi, filed an FIR in the Hailakandi (Sadar) Police Station against the principal and teachers under Sections 75 and 83 (2) of the Juvenile Justice (Care and Protection of Children) Act, 2015.

Children in school uniform resorted to road blockade in front of the school over poor condition of the road for around three hours leading to traffic snarls causing much inconvenience to motorists and pedestrians alike.

The students called off the road blockade when PWD officials gave written assurance that repairing of the road would be done within July 31.