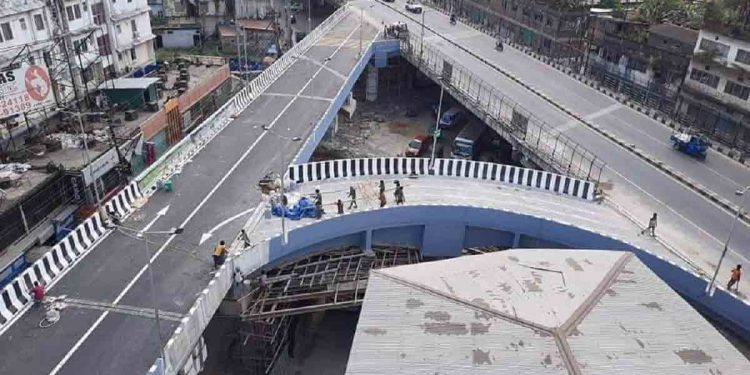 The newly constructed flyover in Guwahati before inauguration

Built with a cost of Rs 58.78 crore, this 425.50 metre-long flyover is expected to ease the traffic at the RG Baruah Road to a great extent.

Assam PWD minister Himanta Biswa Sarma, Guwahati Development Department minister Siddhartha Bhattacharyya were among the few guests who were present at the inauguration.

Speaking on the occasion, Cheif Minister Sarbananda Sonowal said, “The bridge has been constructed in a record time of 19 months.”

“The completion of the bridge within such a short span shows the dedication of the state government towards good governance,” he added.

“The bridge will ease the traffic of Guwahati to a great extent,” he added.

It may be mentioned here that the Assam government had earlier promised to open the bridge for the public before Durga Puja begins.

In his speech, minister Sarma said that very soon the flyovers at Maligaon, and Supermarket will be completed soon.

He also informed that a flyover connecting Rihabari with Arya Vidyapeeth College will be constructed soon as well.

Further, the minister said, that the around 30 per cent of construction work of the bridge connecting Guwahati and North Guwahati has also been completed.

Sarma further informed that an elevated flyover connecting Chandmari with Narengi would be constructed soon.

“A convention hall in the lines of Delhi’s Vigyan Bhawan is also being constructed in the state and it will be completed soon,” he added.