Depriving local entrepreneurs, barges meant for Brahmaputra leased out to operate on Ganga

KPL Kaziranga is one such barge which was dumped at IWT station at Dhubri.

While the Assam government claimed to have taken slew of measures to revamp the state’s river transport system, certain latest decisions of the inland water transport (IWT) department have raised questions over the sincerity of the department in its efforts.

The IWT had recently leased out some of its barges  to some parties based in Kolkata, who had already taken the barges or ships to operate on National Waterway 1, –the Ganga-Bhagirathi-Hooghly river system depriving some local entrepreneurs.

Kolkata based firms Eastern Navigation and Reach Asia (both owned by same person) are running at least ten such barges owned by the Assam Inland Water Transport department since 2008.

“These barges are meant for operating in National waterway 2 which is the stretch of 891 km between Sadiya to Dhubri on the Indo-Bangladesh border,” a local entrepreneur said while questioning the sincerity of the government.

“We have a government here who talks about Jati, Mati and Bheti. And yet the local entrepreneurs are not given the opportunities,” he said.

The Northeast Now investigation has brought to the fore pathetic condition of some of these barges which have been dumped at IWT station in Dhubri.

KPL Kaziranga is one such barge which was dumped at IWT station at Dhubri. It was operated on National Waterway 1 and the salinity of the water had made the barge irreparable. 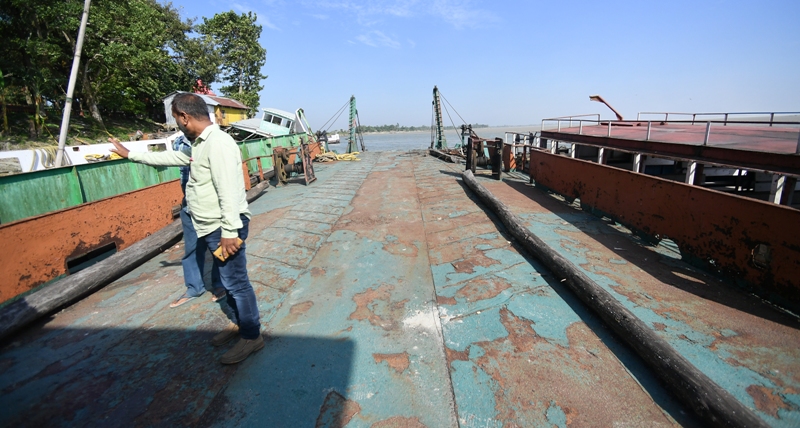 Some of the local entrepreneurs in Assam participated in a recent bid for some of the barges meant for operating in Assam but they were awarded to companies or firms from outside Assam.

“We bid for three such barges—TF Gourisagar (Terminal facility 500 MT), DLB Ronghor (Deck Loading Barge 500 MT) PT Arimatta (Pusher Tug 800 MT) along with others since all these three commercial vessels are located at Guwahati and have to be used as a cluster,” he said.

The entrepreneur added that the IWT has however, accepted their bid only for the TF Gourisagar which will be of no use to them if they do not have DLB Ronghor and PT Arimatta.

“These three have to be used as a cluster. A Pusher Tug can only be used to pull the Loading Barge and without the Pusher Tug and Deck Loading Barge, TF Gourisagar will be of no use to us,” he said.

The discrepancies came at a time when the BJP led government in Assam has launched a project for transformation of the Inland Water Transport (IWT) system on the National Waterways in the state.

The Project was envisaged as a sequel to a request from the Central Government to the World Bank for loan assistance of USD 120 million for the project.