Assam Governor Prof Jagdish Mukhi’s visit to Kamrup (Rural) district on Tuesday was packed with meeting where the Governor reviewed all the development schemes being implemented in the district.

Governor Prof Mukhi said that considering the proximity of the district with Guwahati and in the wake of announcing of State Capital Region where Kamrup district will play a key role, creation of infrastructure will be crucial in the district. 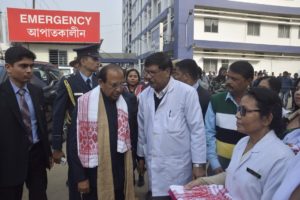 He asked the district administration to adopt an integrated approach to extend the fruits of development throughout the district with the special emphasis on sanitation, drinking water supply, sewerage, power supply, roads, health care and other civic amenities.

He stressed on the need for a holistic approach to meet the existing gaps in regard to road development, power, drinking water supply, health and medi-care facilities.

On the educational front, the Governor asked the Inspector of Schools to strictly monitor the student-teacher ratio and do the needful to adhere with it. He also underscored the need for taking steps so that no children are left out in receiving compulsory education.

For the growth of agricultural production in the district, Governor Mukhi asked the District Agriculture Officer to encourage the farmers for growing cash crops and enhance the farmers’ income by encouraging multi-cropping system.

He also asked the District Agricultural Officer to fix targets for achieving the objectives for every programme related to agriculture.

Further he asked the Deputy Commissioner Kamal Baishya to take the guidance from the Agricultural University for effective agriculture production and render necessary help to the farming community.

“Development of the state depends on the standard of living of the farmers, therefore, utmost importance needs to be given for the growth of the farmers,” the Governor added. 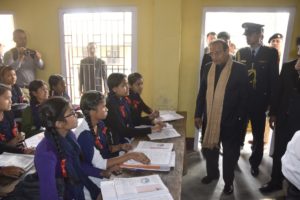 Materializing Gandhiji’s dream for a Swachh Bharat and promote Prime Minister’s Swacch Bharat Abhiyan, the Governor said that all the offices and the educational institutions should strictly adhere to cleanliness and on 7th of every month all should devote at least one hour for cleaning their respective offices. He also asked the Deputy Commissioner to inspect at least six institutions on that day so that a sense of responsibility is evoked in all the citizens and a positive work environment is developed.

The Governor also asked the Deputy Commissioner to ensure repair of all the roads that were damaged by the last floods in the district.

He also asked all the district functionaries to be sincere, punctual and transparent in their dealings and contribute to the development of the district as well the State.

The Governor also inspected Dadara Higher Secondary School, Office of the Joint Director of Health Services and Tolaram Bafna Civil Hospital to see whether the respective institutions have maintained the standard protocol in their operations.

Later, Prof Mukhi also held a meeting with the NGOs, political parties, religious and literary organizations and the media persons of the district, the release further added.

Wrongly jailed UP couple tries to unite with missing children