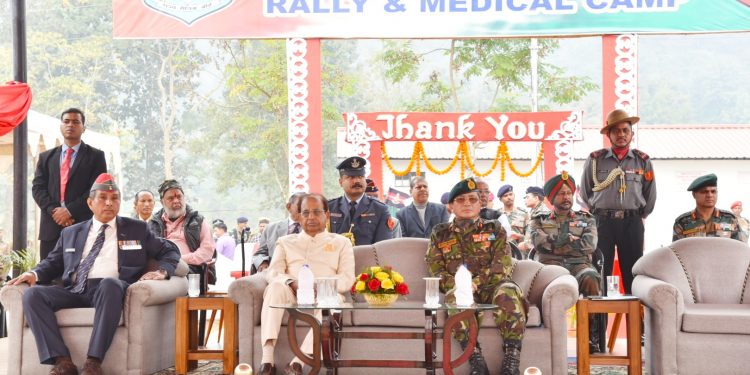 Addressing the rally, Governor Prof Jagdish Mukhi while hailing role of the ex-servicemen said, “The unrelenting endeavour of the men in uniform both in war and peace enabled the general public in our country to stay in harmony with their fellow beings.”

“Throughout their life they served to fortify their country against any aggression. After superannuation they deserve all respect and good treatment from us all,” he added.

Taking a note of the service, discipline and dedication of Indian Army, the Governor said that Indian soldier’s role in nation building has been truly outstanding.

The role of the Army is extraordinary not only along the borders but their presence is felt everywhere be it disturbed situation or peace.

He also said, “We can sleep peacefully because our jawans are always on duty”.

Hailing the Indian Army in helping the youths in imbibing patriotism, the Governor said that the programmes like national integration tour which are conducted by the Army are praise worthy.

He further said that people join the armed forces not for job or for the various facilities involved rather than the spirit of dutifulness to serve the motherland.

Prof Mukhi also praised the valour and sacrifices of the veterans and stated that they are the sources of inspiration, dedication and devotion to everybody.

Earlier GoC, 51 Sub Area, Maj Gen Jarken Gamlin emphasized the commitment of the Army towards the welfare of Veer Naris and veterans.

He also gave a snapshot of different programmes that are being implemented for the welfare of ex-servicemen.

The rally was also addressed by the director, Rajya Sainik Board Brig N D Joshi, who also gave a brief of various welfare schemes run by Assam Government for Veer Naris and ex-servicemen.

Synchronizing with the programme, the Governor felicitated Veer Naris, widows and needy ex-servicemen.

Along with the rally, a medical camp was also organized for a large number of veterans and their families.

The rally was attended by 1000 Veer Naris, ex-servicemen and their dependents from Kamrup (Metro) and Kamrup (Rural)  districts and other senior retired  officers.