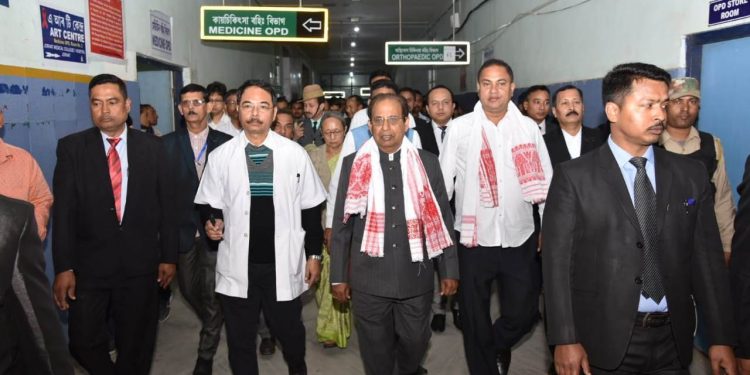 Assam governor Jagdish Mukhi on Friday directed the authorities of Jorhat Medical College Hospital (JMCH) not to allow attendants of patients into the wards 24×7.

Governor Mukhi asked the authorities to make separate sitting arrangements for the attendants within a month.

The governor, who visited a few wards of the hospital, expressed his displeasure on seeing attendants sitting on the beds of patients along with luggage strewn by the bedsides.

Mukhi said that no luggage should be allowed in as this was very unhygienic.

“Attendants should be restricted entry and should be allowed in only during the visiting hours three times a day. This should be strictly enforced by the authorities,” he said.

Mukhi said that another deficiency he had found was that the hospital had a neurosurgeon but no neurologist.

Again there was a state of art Cath Lab but no cardio surgeon. The hospital only had cardiologists.

“I have taken cognisance of these deficiencies and will make arrangements soon to rectify these,” he said.

Regarding the breakdown of the cold chamber in the morgue, Mukhi said that he had been apprised about the matter and that a proposal from the hospital authorities had been passed and would be funded from the Rajya Sabha MP’s funds.

Alastair Neil MacDonald, a British tourist, who had died onboard the luxury ship Charaidew II on January 31, was kept in the morgue of the hospital inside a cooling chamber borrowed from the Tarajan crematorium for about a week before being cremated.