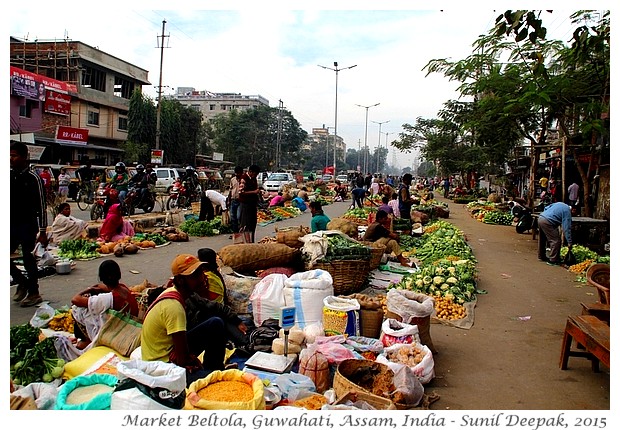 Advantage Assam has offered many disadvantages to the people of the State, particularly the Guwahatians.

The hapless denizens of Guwahati are taken for a ride with myriad of problems faced because of the on-going Global Investors Summit.

While schools along the national highway were forced to close down on Saturday, students returning from schools on Friday had a harrowing time near Sarusajai Stadium, the venue of the summit as they schools were kept stranded along with all other vehicles for security drill on the eve of Prime Minister Narendra Modi’s visit who had inaugurated the summit on Saturday.

The highway was also closed for vehicular traffic for the entire inaugural session when Prime Minister Modi was at the venue causing much harassment to the general public to commute.

Even after reopening of traffic, the national highway witnessed unprecedented traffic snarls much to the inconvenience of the common people.

The trucks carrying goods to the State along with couple of other north-eastern states are not allowed to ply along the highway from 6 am to 10 pm thus creating a serious threat of food crisis.

Is the Sarbananda Sonowal government expecting to invite investors to the State at the cost of citizens’ convenience?

If these were not all, the century-old traditional market at Beltola was forced to close down on Sunday thus denying earning to the small-time traders of the market.

The market, is a traditional fruits and vegetables market. It offers a variety of locally produced food products.

It is also a vantage and traditional trading point between people from Khasi hills in Meghalaya and the local traders.

The huge market, mostly tribal and rural small-time traders do business only two days a week – Thursdays and Sundays.

Sundays being a holiday, is crucial for trading and even that was denied by the government – thanks to the multi-crore business summit.

The entire market area which is usually filled with hustle and bustle every Sunday, wore a deserted look this Sunday.

The small-times were left bemused and helpless this Sunday as there reportedly there was no prior notice of closure.

Even buyers who wait for the grand Sunday to shop for the week’s vegetables were seen moving around anxiously as professionals hardly find time for marketing on working days.

Is the government going to compensate these losses?

Is the government trading small-time business for big investment?

On the contrary, many felt the State Government could have showcased the traditional market to the visiting delegates of the business summit as the century-old market is known for its ingenuity and historical significance.