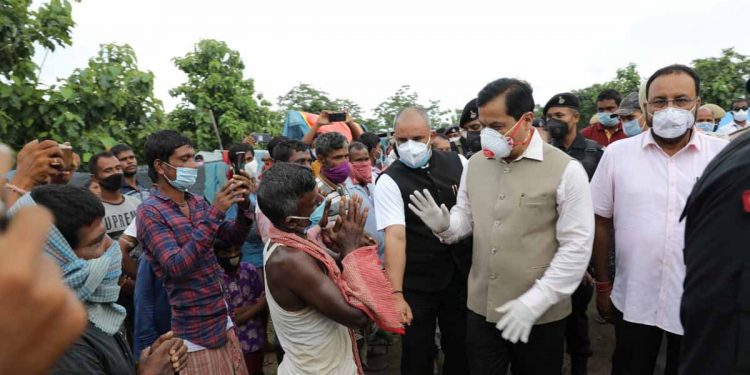 Sonowal took a mechanized boat ride to take stock of the prevailing flood situation in the district.

He visited Modonabori village where nearly 200 families are taking shelter on a highland and interacted with the flood-hit people.

He took stock of the facilities being provided to these people by the state government.

It may be mentioned that the Morigaon district administration is providing food and other relief material, medical services to the flood-affected people.

The veterinary department has also taken steps for health checkup of animals at the village.

Earlier, the Chief Minister handed over ex-gratia cheque of Rs 4 lakh to the next of kin of the flood victims of the district at Jharagaon under Mayong Revenue Circle.

While talking to media persons after visiting Modonabori, the Chief Minister said that the State is going through a difficult phase.

“Assam is fighting against flood, erosion, landslide and COVID-19 simultaneously,” he said.

“The state government is making sincere efforts to provide all necessary help and support to the people at these difficult hours,” he added.

He further stated that the water resources department has already completed construction of all embankments under Jagiroad LAC.

Sonowal further informed that the state government would construct a 7.5 k.m. embankment bordering Jagiroad and Lahorighat LAC, which was earlier built by P&RD Department and was in a deplorable condition.

He also informed that construction of two embankments in the LAC namely Mikirgaon Kathoni and Kathoni to Palashguri with an expenditure of Rs. 28 crore is expected to be complete soon.

In view of COVID-19 pandemic, the Chief Minister urged people to strictly maintain the social distancing norms and wear masks as well as regularly wash their hands to keep themselves safe.

He said that as the government has stepped up testing facilities, the number of COVID positive patients are increasing but there is no reason to panic.

He, however, called upon people to adhere to the guidelines issued by the health department to deal with COVID-19.