6 ethnic communities in Assam have been demanding grant of ST status since a long time.

The BJP Governments both in Assam as well as in the Centre, not only ‘failed’ to implement the Clause 6 report of the Assam Accord, submitted by a high-powered committee, they also ‘failed’ to grant ST (Scheduled Tribes) status to the 6 ethnic communities in the State.

6 communities in Assam – Maran, Matak, Tai Ahom, Chutia, Koch Rajbongshi and the tea tribes have been demanding grant of ST status since a long time.

The Committee also included representatives of the Assam Government.

The Committee submitted its report way back in December 2018. But over 2 years have passed, but the report continues to gather dust in the corridors of New Delhi.

Moreover, replying in written to a question by Assam Lok Sabha MPs Gaurav Gogoi and Abdul Khaleque, Union Minister of State for Tribal Affairs Renuka Singh Saruta denied to divulge details of the report saying that the report has been classified as ‘secret’.

Moreover, the written reply from the Ministry of Tribal Affairs states that “no timeline can be specified for inclusion of (6) communities” in ST category. 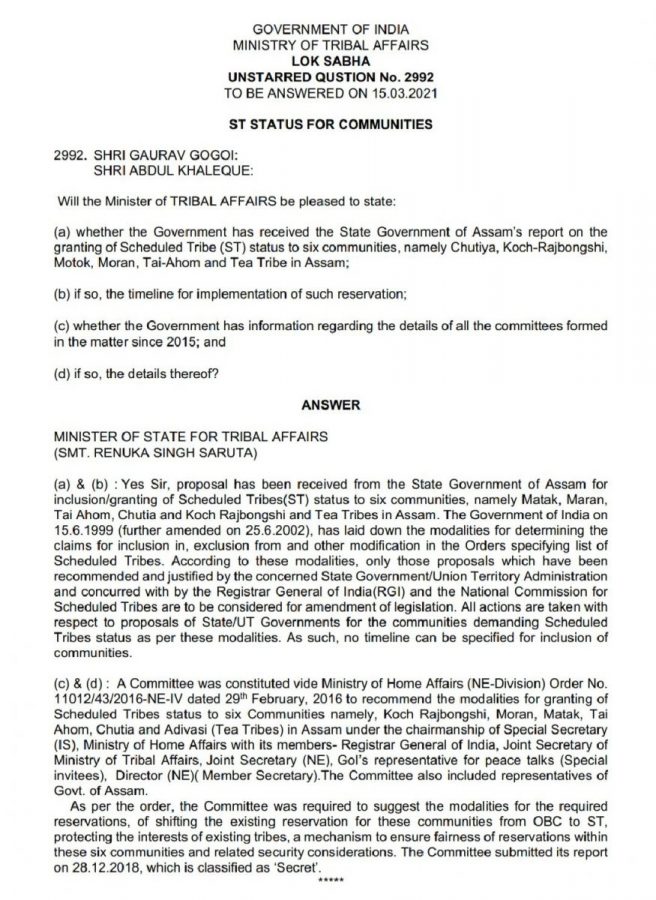 On the other hand, the Group of Ministers (GoM) formed by the Assam Government during the peak of the anti-Citizenship Amendment Act (CAA) protest in the State in 2020, has also failed to meet the deadline of October 2020.

The GoM, headed by Assam Minister Himanta Biswa Sarma, is yet to submit its report.

Many of the six groups now feel the Centre had ordered the formation of the GoM just to diffuse the anger of the people against the BJP government for bringing the CAA.

Notably, the BJP has maintained absolute silence during the course of its election campaigning in Assam in regards to the grant of ST status to six ethnic tribes in the State.