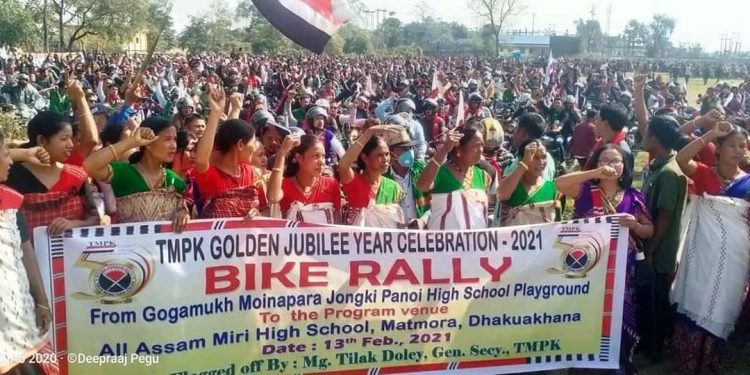 A view of the rally taken out on the occasion of the Golden Jubilee celebration of Takam Mising Porin Kebang (TMPK). Image credit - Northeast Now

The second phase of the Golden Jubilee celebration of Takam Mising Porin Kebang (TMPK) began on Saturday at Dhakuakhana in Lakhimpur district.

The two-day event started at the playground of the All Assam Miri HS School in Maatmora of Dhakuakhana with the inauguration of the delegates’ camp by reception committee secretary Indra Kumar Chungkrang.

Various cultural programmes showcasing the colourful and vibrant culture of the Mising community have been organized in the event.

A huge motorcycle rally was taken out by TMPK members from Moinapara Jonki Panoi High School in Gogamukh to the venue of the event at Maatmora.

The rally was flagged off by the general secretary of TMPK, Tilak Doley.

An open session was held at the venue where the welcome address was delivered by Tilak Doley.

While flagging off the rally, TMPK general secretary Tilak Doley said, “In the last fifty years, the TMPK has been fighting relentlessly for the development and dignified progress of the Mising community as well as all other communities of Assam.”

On the second day of the programme, internationally-renowned conservationist Padmashri Jadav Payeng will attend the event as the chief guest.

The first phase of the Golden Jubilee of TMPK was held at Jonai in January this year.