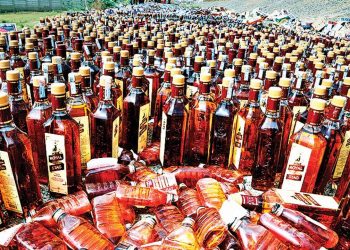 The police have seized bottles of Indian made foreign liquor and country and country made liquor from different parts of the Golaghat district in the past 48 hours.

Four individuals were also arrested during the raids.

The police conducted raids in different places in a drive against illegal liquor in the state.

A total of 3,587 litres of country made liquor were destroyed during the drive.

Police personnel also seized 285 bottles of Indian made foreign liquor during the raids.

Meanwhile, the Golaghat police have requested citizens to help them in their mission ‘Crime Free Golaghat’ by asking them to report about any illegal activity including drug trade, oil theft etc.

Citizens can report about such activities on the Golaghat police’s Facebook page, Twitter handle and WhatsApp number ‘8471843460’.