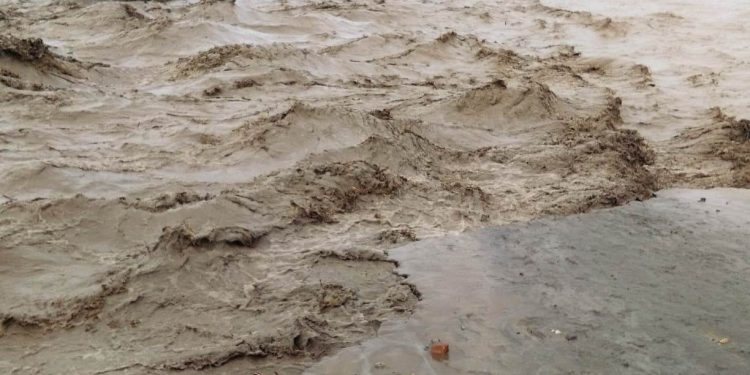 Tragedy struck Assam’s Lakhimpur district on the eve of Independence Day as four persons were feared dead in the sudden flash flood in the river Singra.

The river suddenly surged with heavy current overflowing the area of FC Grant No 30 near Dolohat under Nowboicha Revenue Circle of Lakhimpur district on Friday and breached the Dolahat Weekly Bazar-Phoolbari PWD Road that connects NH-15.

The sudden flood in the river swept away many houses and damaged equal numbers as residents scrambled to save and retrieve their belongings amidst devastation.

Two persons have been killed as they got drowned in the fast moving river.

The dead have been identified as Sunil Das (45), son of Late Binod Das of Phoolbari Pushpa Roy (14), daughter of Sushil Roy of Phulbari.

Another minor Paresh Roy (13), son of Akhil Roy was swept away in the flash flood of Singra river and search operation by State Disaster Response Force (SDRF) has been on.

One more person is also reportedly missing in the flood which may increase the number of deaths in the disaster.

The change of course of the Singra river breaching the PWD road in this flash flood have inundated 20 villages in that area.

This abnormal surge in the river Singra has baffled many locals.

It may be recalled that Singra river breached the same road in 2018 in same devastating fashion in the area close to the RCC bridge over NH-15 in 2018.

The flood and change of course in the river has not usually been seen in its upper area close to the Aruncahal hills near the Dolahat Tea Estate in Lakhimpur district.

Singra usually floods in its downstream areas of Garchiga-Pandhowa-Mohghuli area—which is also less severe during the current monsoon season.

In 2013, a Community Based Flood Early Warning System (CB-FEWS) on Singra river in Lakhimpur district was installed by International Centre for Integrated Mountain Development (ICIMOD) and Aaranyak under the Himalayan Climate Change Adaptation Programme (HICAP).

But the installed CB-FEWS has been of no effect on the river as disasters like Friday’s are concerned.