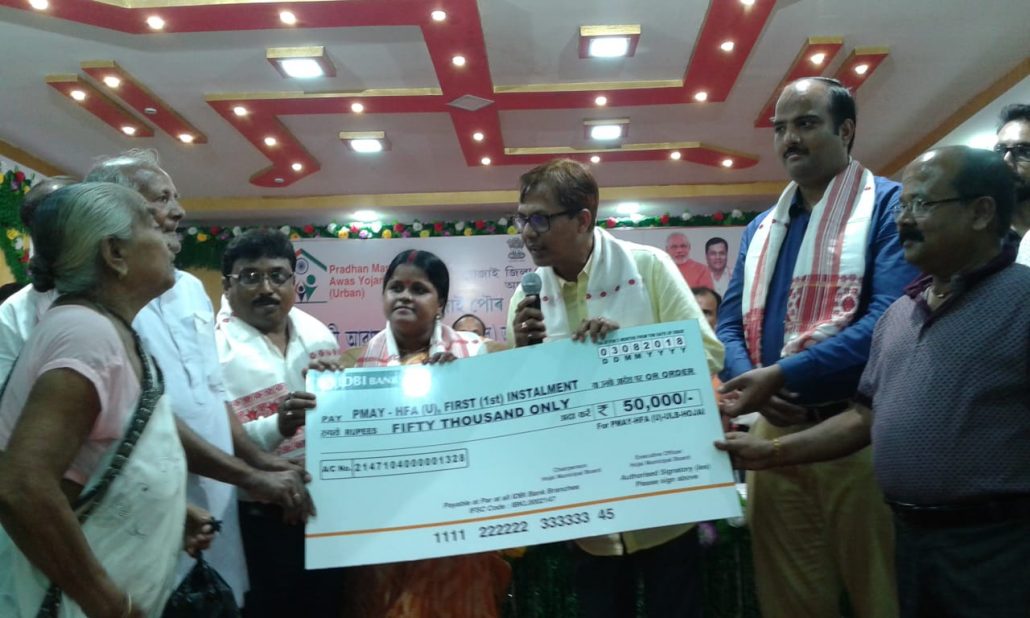 “During the reign of Atal Bihari Vajpayee, BJP government  focused on rural areas and realized village’s of India should be developed. Only then India as a whole will prosper.” said Legislator of Hojai Constituency Shiladitya Deb, at the financial aid distribution  programme under Pradhan Mantri Awas Yojana (PMAY).

Deb graced the occasion as Chief Guest. The programme was organized under the aegis of Hojai District Administration and Municipal Board at JK Kedia Smriti Bhawan in Hojai on Friday.

He said since the last 70 years Indian politics has revolved around food, shelter and clothes but even then these three essential necessities has not been made it all the people because of dirty politics by earlier  governments.

He lauded the efforts of Narendra Modi government. Since they came to power, they are working to uplift weaker sections of the society and has promised to make these three necessities available to all by 2022.

He explained in detail about the Yojana and its benefits. This scheme opened on November 20, 2016 in the entire nation.

In Assam PMAY began on November 24, 2017 and till now 7,100 people have benefited from this project. In Hojai 1,648 people applied, 522 people had their own property as well as in their names. After full scrutiny 310 applications were accepted. On Friday 94 applicants were handed over the financial aid under the scheme.

He further praised how the BJP government is working for overall development. He said the works of Nilbagan to Hojai and Joraphukri to Hojai roadway will be completed within stipulated time and everything is being monitored by in regular intervals to prevent any corruption.

In connection with National Register Of Citizens  (NRC) he said every genuine Indian will find their names in Final Draft of NRC and there is no need to panic.

He also lambasted  the comments made by Chief Minister of West Bengal Mamta Banerjee on NRC.

Guest of Honour Deputy Commissioner Of Hojai District Manvendra Pratap Singh, IAS said, “In PMAY Government is providing funds of 2,00,000, he requested all the beneficiaries to use this amount for which it has been provided.

He further said this 2,00,000 amount will be given in four installments. In the first installment 50,000, second 60,000,third 60,000  and in fourth final installment 30,000. He also said apart from this beneficiaries can also invest their own amount to make their house a beautiful one.

Earlier in the beginning HMB ‘s Vice-President Samir Sarkar in brief explained the objective of the programme.

Mamta Dey, Chairperon HMB, Sanjai Mahanta, Executive Officer HMB and many other eminent guests were present. The programme was anchored by Ashim Sen Gupta which ended with the national anthem.