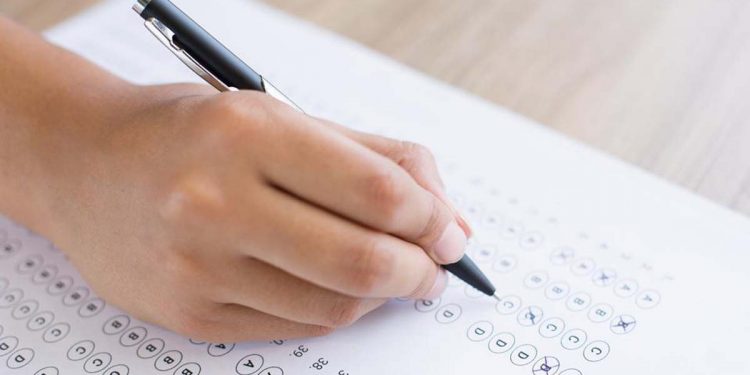 An employee of a government school in Goalpara was arrested for supplying a filled-up OMR sheet to a candidate during the TET examination on Sunday.

He was caught red-handed during the high school TET examination on Sunday when he tried to supply an already filled up OMR (Optical Mark Recognition) sheet from outside to a candidate.

The accused employee was identified as Nur Nobi while the candidate to whom he supplied the OMR sheet was Pranabjyoti Kalita.

The incident took place in room No 24 of PR Govt. HS and MP School.

It occurred just five minutes prior to the end of the examination.

A lady teacher was present as the invigilator at the time of the incident.

“The staff member came inside the examination room and tried to exchange the OMR sheet of the candidate with the one in his hand,” said a candidate who was witness to the incident.

“We protested and brought the matter to the notice of the invigilator. Then he was taken to the principal’s room,” said the candidate.

Principal M. Sojimuddin Ahmed immediately brought the matter to the notice of the Inspector of Schools and the district administration.

Later, Nur Nobi was arrested and the OMR sheet of Pranabjyoti Kalita has been seized for investigation.

Sources claimed the candidate in question is a close relative of a senior teacher of the same school, who was present at the school during the occurrence of the incident.

Himanta Biswa Sarma, who was handed over the responsibility of the education department again on Saturday, is scheduled to visit the district on Monday.