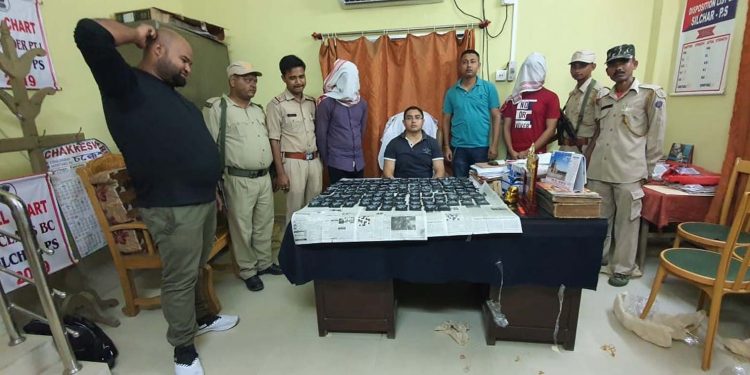 DSP (HQ), Cachar, A.J. Baruah posing for a photograph with the arrested persons in Silchar on Sunday. Also seen are bannned drugs worth Rs 60 lakh in their possession. Image creidt - Northeaat Now

In a major breakthrough, Cachar Police seized banned drugs worth Rs 90 lakh from two separate places in the district on Sunday.

Based on a tip-off on Sunday morning, the deputy superintendent of police (Headquarters), A. J. Baruah and his team conducted a raid in Silchar’s Bilpar area.

The police team apprehended Kishan Das, a 1st semester student of Lalit Jain College and 28-year-old Raju Das, a resident of Dholai along with 118 packets of suspected Yaba tablets from their possession.

Talking to Northeast Now, DSP Baruah said, “We have apprehended two individuals with 118 packets of WY (What’s Yours) tablets with each packet containing 200 tablets.”

Baruah added, “As per our estimates, the cost of these 23,600 banned tablets would be Rs 50-60 lakh in today’s market and both Raju and Kishan Das would be produced in court on Monday.”

Meanwhile, sub-divisional police officer (SDPO) of Lakhipur and his team raided one wine shop named Mourya at Binnakandi Ghat and apprehended the manager-cum-owner of the shop, 30-year-old Kishore Roy.

From his possession, the police recovered 240 grams of suspected heroine in 22 soap cases.

Apart from arresting the accused and seizure of the contraband, wine shop was sealed by the excise officials, informed police sources.

The SDPO, Lakhipur informed that the seized banned drugs would cost Rs 30 lakh in the market.