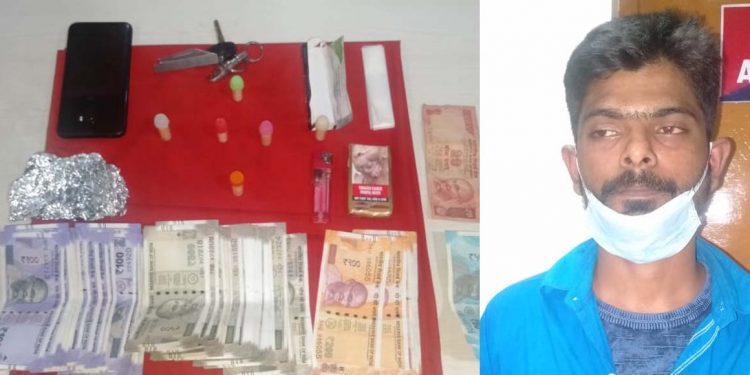 A drug peddler has been arrested by Mangaldai Police along with brown sugar.

The drug peddler was remanded to two-day police custody by a Mangaldai court on Monday.

The drug peddler has been identified as 26-year-old Dadul Ali.

A case (No 244 /2020) has been registered at Mangaldai police station in Darrang district against him under section 20 (b).

According to police, acting on an input about the movement of a drug peddler in Mangaldai town, a team from Mangaldai PS, led by its sub-inspector Chandan Das and Town Branch in-charge sub-inspector Latuk Das  on Sunday night conducted a raid in ward no 2 area of the town.

During the raid, the police team managed to arrest Dadul Ali, son of late Sarfaruddin Ali, a resident of the locality.

The police team also recovered around six grams of suspected brown sugar in six small plastic containers, a cash amount of Rs 26,520, strips of foil paper, a knife, a lighter besides a Pulsar 220 bike bearing registration no AS01 BZ 5688.

On Monday, the arrested drug peddler was produced before a court at Mangaldai which remanded him to two days’ police custody.