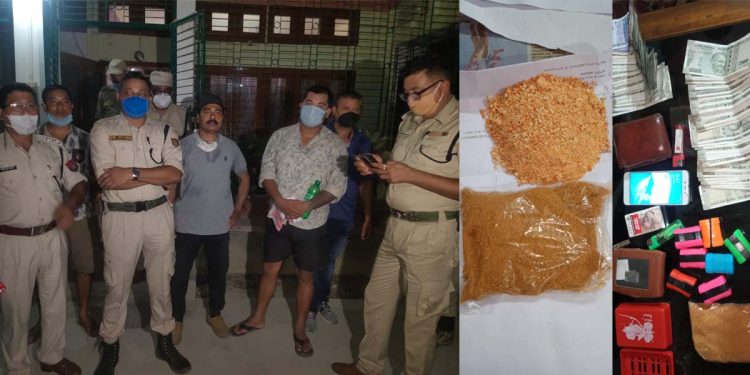 The drugs dealer arrested in Dibrugarh along with heroin. Image credit - Twitter @dibrugarhpolice

Dibrugarh Police on Tuesday night arrested one drug dealer and seized 110 grams of suspected heroin along with Rs 75,000 from his possession in Dibrugarh.

The drug dealer has been identified as 27-year-old Tushar Jyoti Gogoi, a resident of Rupnagar in Pub Milan Nagar area of Dibrugarh town.

It is estimated that the market value of the seized contraband drugs will be Rs. 10 lakh.

“We had information that a person was dealing in narcotics and on Tuesday night we raided the drug dealer’s house and found 110 grams of suspected heroin from his possession,” said the officer-in-charge of Dibrugarh police station, Rajiv Saikia.

“He kept the drugs in his residence to sell it in Arunachal Pradesh and some areas in Upper Assam,” the police officer said.

“The market value of the seized contraband drugs will be Rs. 10 lakh,” he added.

“Tushar Jyoti Gogoi was running illegal drugs business for many days and on Tuesday, we busted the drugs den during an operation launched after getting information from an internal source,” said Saikia.

Dibrugarh is a hub for illegal drug trade in Upper Assam and active peddlers are running the drugs racket for a long time.

Dibrugarh additional superintendent of police (headquarters) Padmanav Baruah said, “We have launched a crackdown on drug racketeers in Dibrugarh to flush out the dealers. Within a week, we have arrested two drug dealers and seized contraband drugs from their possession.”

In yet another successful ops against drugs, 110 grams of Heroin was seized in Rup Nagar, Pub Milan Nagar along with cash of Rs 72,000 by Team Sadar PS from the house of the accused who has been arrested. @assampolice @DGPAssamPolice @narcoticsbureau pic.twitter.com/9pPGONysWi

“Our operation against illegal drugs will continue. We are investigating every aspect of drug racket very minutely,” the police officer said.

Recently, one drug peddler, identified as Yunus Khan, was arrested with 300 grams of suspected brown sugar from the Kalibari area of Dibrugarh.

Sources said the drugs were mostly procured from the Buxar district of Bihar and transported to Dibrugarh via train.

“The demand for contraband drugs has been high in Arunachal Pradesh and the drug peddlers supply it to the destinations. Many college-going students are involved in the racket,” said sources.