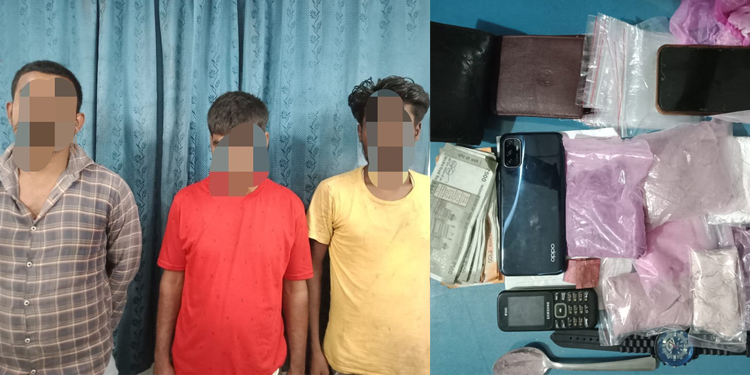 The trio, arrested from Doomdooma town in Tinsukia district, was identified as Amod Shah, a drug dealer of the area and two drug peddlers Munna Sahani and Sunil Das.

The Tinsukia superintendent of police, Debojit Deori said, “After receiving specific information, a police team from Doomdooma police station carried out a raid below the Doomdooma town overbridge and intercepted three persons carrying out a drug deal.”

“A search on them led to the recovery of the consignment of drugs. We have arrested one drug dealer and two drug peddlers,” Deori said.

The sub-Inspector of Doomdooma police station, Chittaranjan Buragohain, who led the recovery said the accused, Amod Shah, was the kingpin of the entire drugs racket in the Doomdooma area and he used to supply drugs to his customers through his network.

The trio has been booked under various sections of the Narcotic Drugs and Psychotropic Substances (NDPS) Act.

Raids carried out by Tinsukia Police in the recent past led to the arrest of several drug peddlers besides recovery of a substantial amount of brown sugar and cannabis.

“Our crackdown on drugs racket will continue. Many young people are involved in drugs consumption and drug peddling,” Deori informed.