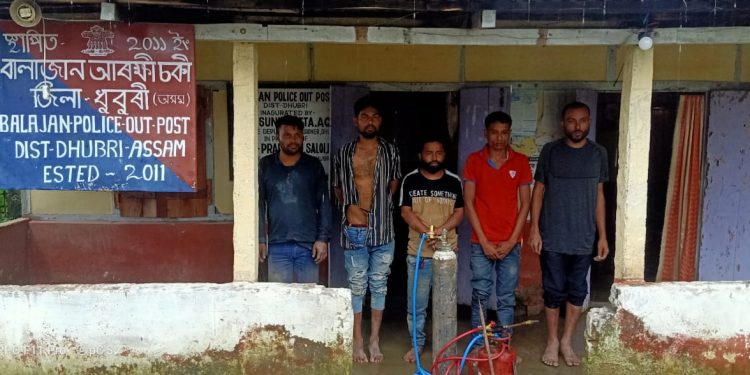 Acting on a tip-off, Dhubri police has foiled an inter-state gang of notorious criminals planning to loot one ATM at Gauripur area in the district of Assam on Thursday.

The Dhubri police led by Deputy Superintendent of Police (HQ) Trinayan Bhuyan laid  an ambush at  Daubhagi  and Balajan respectively under Gauripur police station and as a result of alertness of ambush team,  one four wheeler bearing registration number AS 15 G 4410  and one  two wheeler was successfully intercepted at Balajan.

During the  operation as a whole and search of the involved vehicle/bike, the police has recovered one 7.65 pistol, two rounds live bullets,one LPG Cylinder,One Oxygen Cylinder,One Iron Cutter, one Hyndai vehicle, one two wheeler AS 14 F 5809 and other items suspected to be used in ATM break.

In this connection,five persons have so far been arrested including the suspect kingpin belongs to Katihar of Bihar who have been identified as Rahul Roy aged about 23 years.

The other four arrested persons have been identified as Saidul Islam (27) and Aminul Houqe (22) of Barpeta while Sajahan Ali (27) and Muktar Hussain are the residents of Kokrajhar district of Assam.

Additional supertendent of police, Dhubri, Hiranya Barman said that the police have registered a case under relevant sections of IPC and further investigation into the matter is going on.

“We are questioning the arrested accused to find the involvement of any other more persons and about their future and past activities.” said Barman.