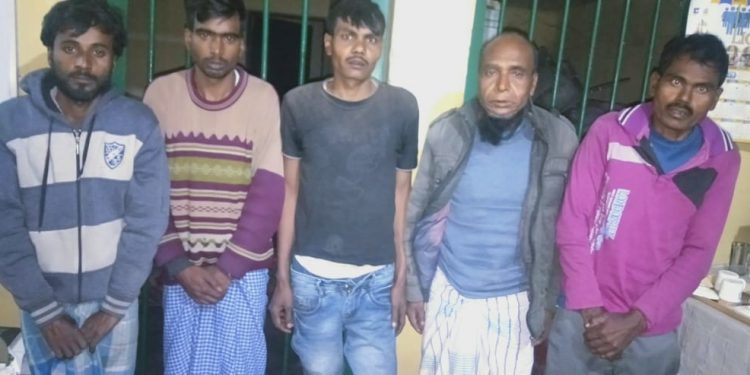 Assam’s Dhubri police on Monday have arrested five persons and solved a case of robbery within 24 hours of the crime.

The dacoity was committed along National Highway 31 in Dhubri district.

As per available information, on Monday, at around 4:30 am, information was received regarding dacoity committed along National Highway 31 at Kherabari part II area under Agomani police station of Dhubri district.

Some unknown miscreants obstructed the road by keeping a Banana Tree on road and looted people who were travelling in an auto-rickshaw in which four local garment businessmen were coming back home from Guwahati.

The unknown miscreants have not only looted their money and other valuable articles but also attacked the commuters with sharp weapon causing grievous injury to one of the commuter.

They looted cash around Rs six lakhs and other articles of the victims.

“It came to light that there were six miscreants involved in the crime including one accused belonging to Coochbehar district of West Bengal. Weapons used in the crime have also been recovered on being led by the accused,” he informed.

Further, by utilizing human and technical intelligence, five out of total six accused have been arrested.

The case has been solved within 24 hours said Bhuyan.

All four are the residents of Dhubri district while the fifth arrested accused identified as Baneswar Sarkar and aged about 40 years is identified as the son of one Mahandra Nath Sarkar, and the resident of Jagir Chilakhana under Tufanganj police station of Coochbehar district in West Bengal.

Police further said massive hunt is on for the last of the accused.

Police have also recovered around Rs 30000 from the possession of the accused persons.

Meanwhile, while further investigation is going on, the DSP added.