Firecrackers being sold by unauthorised shops seized by administration 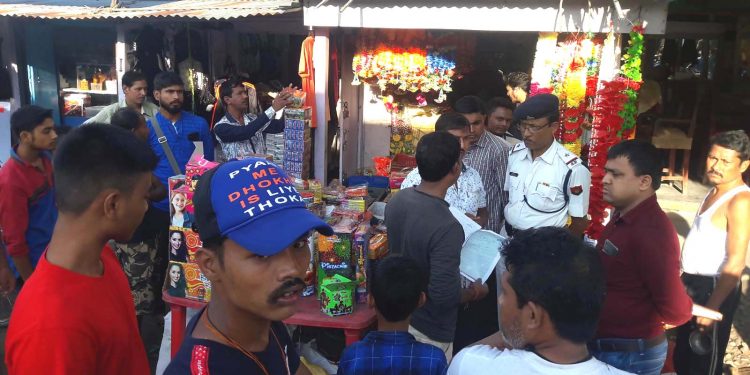 The Bhergaon sub-divisional administration on Sunday launched a crackdown on the unauthorized firecracker shops at Tangla town in Udalguri.

A number of firecracker shops have been set up at Tangla town in Udalguri district for selling crackers on the occasion of Diwali.

Based on specific inputs, an operation was carried out by a team led by assistant commissioner Kushal Kalita accompanied by Tangla Police personnel.

The joint team of Bhergaon sub-divisional administration and Tangla Police seized firecrackers from an unauthorized dealer in the heart of Tangla town in Udalguri district.

“The Bhergaon sub-divisional administration had given permission for sale of firecrackers to a number of dealers in Tangla, Kalaigaon and Dimakuchi,” said assistant commissioner Kushal Kalita.

“The permission for sale was given under section 84 of the Explosives Rules 2008. But we found a shop selling firecrackers without any permission,” added Kalita.

“The firecrackers of the shop were seized for further action,” he added.

Many cracker shops set up only for Diwali continue temporary trade after procuring permission from the administration.

It may be mentioned that along with other parts of the country, people in Udalguri district also celebrated Diwali, the festival of lights, on Sunday.

The people decorated their homes with colourful lights and earthen lamps, and burst crackers.

As per a 2018 Supreme Court order, the people will have to end bursting of crackers within 8 pm-10 pm during Diwali.

According the apex court order, the decibel limit for the firecracker should be maximum 125 decibel.