Assam: Conquering the world for love

An Australian adventurer couple has been drawing the attention of locals in eastern Assam’s Sivasagar.

No, denizens of Sivasagar are used to foreigners.

But the cynosure of these curious onlookers is the bike they are riding on.

This young couple is camping in Sivasagar for past couple of days – enchanted by the serene environment and beauty of the remnants of the bygone era of Ahom regime. 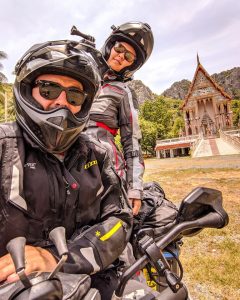 They are on a mission – an adventure journey on their super-bike from Sydney to New York.

And as part of their journey, they are touring the Northeast.

But why this adventure tour?

It’s all for love – the eternal emotion of this world.

Steve Crombie proposed Amelia Darmawan for marriage after knowing her and being friends for around five years,

Amelia laid down a pre-condition.

She wanted Steve to take her for some adventure, and here they are – a tour on a motorbike from Sydney to New York traversing countries across the globe.

Steve designed the KTM 1190r mean machine built by Teknik Motorsport and modified throughout the adventure. 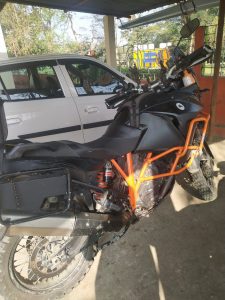 However, wherever they have no road for the bike they take the sea route.

“But no planes,” insists Steve.

They have entered India from Myanmar through Moreh in Manipur after two years of starting their journey from Sydney.

Traversing through Assam and Meghalaya, they went to Bangladesh and then back again to the Northeast, through Dawki.

“The environment in the Northeast is so serene and there is so much to explore in this untapped natural resources,” opine Steve and Amelia.

Steve has full faith in his machine.

“I rode both on and off roads – through snow and sand, but this bike withstood all terrains. I had no problem till now,” said a beaming Steve.

An enthusiastic Amelia, who ride pillion, has also by now developed complete faith and trust on Steve.

“My trust has grown with every passing day,” said Amelia.

She is now looking forward to complete the journey successfully, go home, marry Steve and have a family.

“We are making videos of our journey for posterity, so that when we have children they should cherish the adventure that their parents undertook to start a family,” said Amelia and Steve in unison.

They have their digital media platforms christened MotoLife Diaries.

When asked what will be their reaction when in the future their children aspire to take such adventures, Steve replied tongue in cheek, “l will just say live the life you love and love the life you live! As long as they are happy I will be happy!”

“My nephew is also planning a world tour by train. It is wonderful to see him chase his dreams. I think my sister might blame me though!” laughed Steve.

This is, however, not the first time that Steve has undertaken such an adventure journey.

Earlier, from 2003 to 2005 he undertook a adventure tour through South and North America which lead to a book called Lost On Earth and a documentary series with Discovery Channel called ‘Natural Born Traveller‘.

Amid their arduous journey, Steve and Amelia also keep a tab on their media and entertainment business.

During their stopover, where they get active internet connectivity, Steve and Amelia get down to their desk job – coordinating with his colleagues and updating himself of the business that he owns.

From Sivasagar, they are moving to Arunachal Pradesh via Dibrugarh and crossing the Bogibeel Bridge.

They will leave the country and enter Pakistan and then to Afghanistan, Russia and then onward to their final destination – New York.