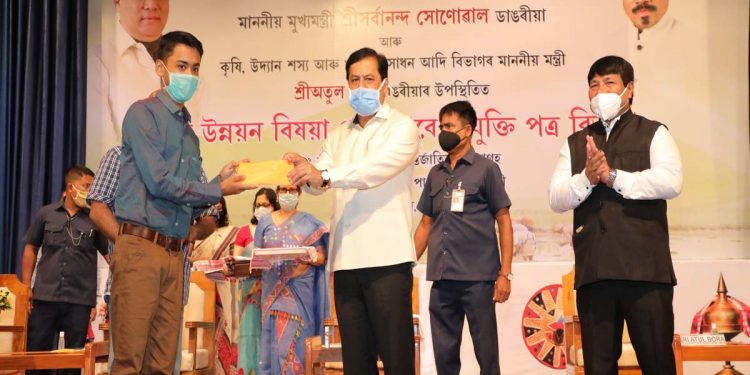 Assam government is striving to provide dignity to the farmers of the state, said Chief Minister Sarbananda Sonowal on Wednesday while distributing appointment letters to 111 Agriculture Development Officers (ADO) under Agriculture Department in Guwahati.

“The new appointees must dedicate themselves towards making agriculture glamorous so that the young generation aspires to take up farming,” Sonowal said.

“Lots of irregularities took place in the implementation of Pradhan Mantri Kishan Sanman Nidhi scheme in the state and no one, who embezzled the money meant for the farmers, would be spared,” he further added.

“The new ADOs will have to shoulder that responsibility of ensuring that no such corrupt practices take place in future,” Sonowal said.

The CM further informed that the Agriculture Department would recruit additional 3189 personnel including Agricultural Extension Officers, Village Level Extension Workers (VLEW) etc while 157 technical recruitments would be made by the department including junior engineers within this year.

Recalling his visit to Vietnam with progressive farmers of the state, the Chief Minister informed that Vietnam could script success stories in agriculture and its allied sectors because the agro-scientists and officials worked as a team with the farmers to utilize their available resources to the maximum while adopting innovative technologies.

Sonowal urged the new appointees to implement their ideas and teachings in the field so that Assam could chart newer territories of rapid agricultural progress.

Sonowal further informed that the state did the business of agricultural products worth Rs. 357 crore during the 70 days of lockdown.

“Due to the state government’s initiative Assam’s farmers could export their produce to the markets of London, Abu Dhabi, Dubai, Singapore etc,” Sonowal said.

He also shed light on the various steps taken by the state government to help the farmers, which include providing Rs 5000 to 4.5 lakh farmers for buying agricultural equipment under Mukhya Mantrir Krishi Sa-Sajuli Yojana, distributing a tractor to each of 26 thousand villages under CMSGUY, providing 48 thousand shallow pumps to the farmers of the state etc.

Sonowal also urged the ADOs to create success stories in the agriculture sector by maintaining close relations with the farming community.