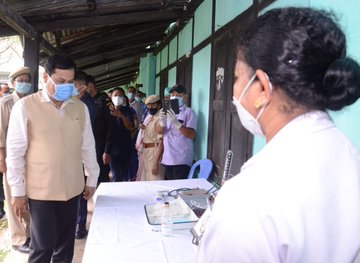 These people are lodged at the relief camp at Teok Rajabari HS under Teok Revenue Circle School since Tuesday after their houses were submerged by floodwaters on Monday.

The chief minister asked the district administration officials to maintain social distancing and other COVID-19 protocols among the inmates.

He further asked them to make special arrangements for the elderly and children.

More than 33 lakh people in 29 districts of Assam have been affected by floods including Jorhat district.

Later Sonowal laid the foundation stone of a cultural stage at the Dhekiakhowa Bornamghar on the eastern outskirts of Jorhat.

A district administration official informed that the stage would be constructed from untied fund at a cost Rs one crore of the State Government.

Sonowal also laid the foundation stone of a modern toilet facility at the Bornamghar compound which will be constructed at a cost of Rs 10 lakh under the Asom Darshan scheme (2019-20), the official stated.

“Dhekiakhowa Bornamghar is a seat of Assamese spiritualism and the government is working towards developing the place, which is steeped in teachings of great Vaishnavite saint Madhabdev, into an important tourist centre,” Sonowal said on the occasion.

The managing committee of the Dhekiakhowa Bornamghar submitted a memorandum to the chief minister seeking socio-economic development of the area, the official said.

Later, Sonowal inaugurated the newly-constructed building of Teok Police Station under the Mission for Overall Improvement of Thana for the Responsive Image (MOITRI) scheme in the eastern part of Jorhat district.

He also inaugurated the new thana buildings of Sivasagar and Sarupathar in Golaghat district, via video-conferencing.

Addressing the gathering on the occasion, the chief minister lauded the policemen rank and file for efficiently and fearlessly discharging their duty in the ongoing fight against the outbreak of COVID-19.

He said over 600 policemen across the State have got infected by the virus while contributing in the fight against the pandemic, the official said.

Sonowal announced that the Government has initiated the process to launch a scheme for construction of 100 barracks for constables across Assam after which another scheme to construct more such barracks will be taken up.

The chief minister further said that infrastructure up-gradation under MOITRI scheme about 72 police stations across the State was in the completion stage.