Sonowal shared his grief and condolences with the bereaved family members and handed over a cheque worth Rs. 20 lakh to late Kalita’s wife.

During his visit, Sonowal paid rich floral tributes to the portrait of Pranay Kalita.

He said the state is proud of his valiance and sense of duty towards the nation.

“His sacrifice is a source of inspiration, devotion, and dedication for the youth across the nation,” Sonowal said. 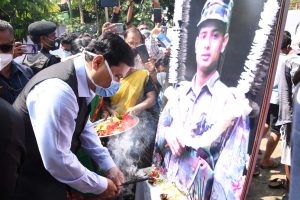 Sonowal also said his duty towards safeguarding the unity, sovereignty, and integrity of the nation will not go in vain.

Responding to a demand, Sonowal said the road leading to the residence of the martyred jawan would get a facelift and be named after the jawan.

Pranay Kalita along with two other Assam Rifles jawans died and 6 others were injured during an ambush by militants in Manipur’s Chandel district on July 29.

His last rites were performed in his native village at Ghatbar with full state honours on July 31.

Industry and commerce minister Chandra Mohan Patowary, MP Dilip Saikia, and a host of others were present during the chief minister’s visit.