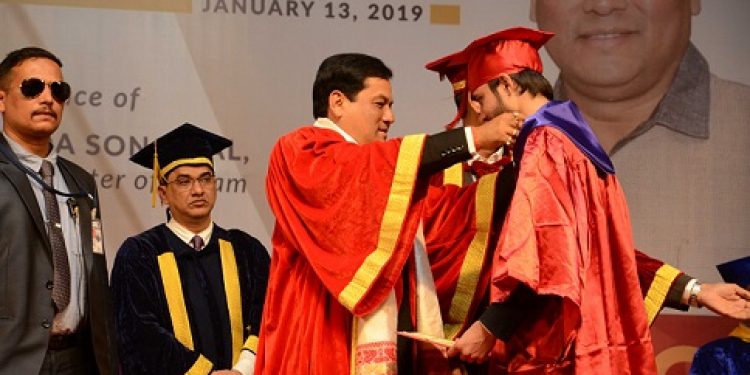 Assam Chief Minister Sarbananda Sonowal awarding degree to a student at the 5th convocation ceremony of Kaziranga University at Jorhat on Sunday.

Members of KMSS, ATASU and AJYCP staged protest on AT Road at Koraikhowa in Jorhat when Assam Chief Minister Sarbananda Sonowal landed in a helicopter at the Kaziranga University field to attend the 5th convocation of the university.

The Citizenship (Amendment) Bill, 2016 was passed in the Lok Sabha recently.

According to information, no protestor was allowed to go anywhere near the venue which was totally cordoned off.

The security was put in place since Saturday and students residing outside the campus were also not allowed to enter the campus on Sunday.

Sonowal in his speech as the chief guest praised Mary Kom for her achievements despite struggle throughout her life.

Assam Chief Minister Sonowal said the students should look up to Mary Kom as an ideal as hard work and perseverance ultimately paid off.

He said India has 80 crore youths, who will have to build India into a strong nation and students are the backbone of the country.

Sonowal further asked the students to pursue their dreams with single-minded dedication.

Mary Kom in her speech said there are lots of potential among the students to shine in different fields of sports.

She said it is due to her achievements in the boxing ring which have got her a nomination to become a member of the Rajya Sabha.

The world boxing champion further said colleges and universities should encourage students who excel in sports.