Assam: Carcass of a wild elephant recovered in Baksa 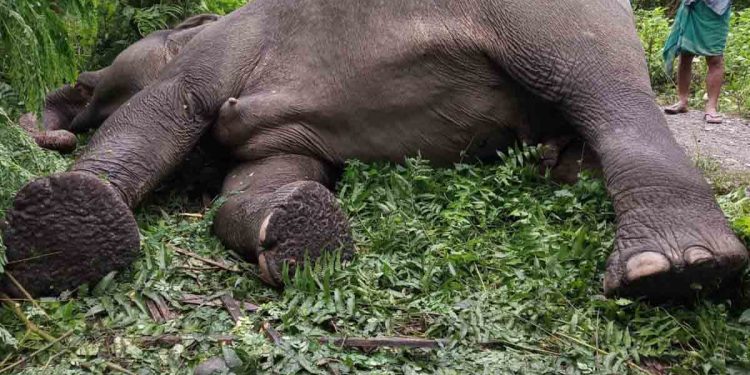 The carcass of an elephant. Image: Northeast Now

The carcass of a wild elephant was recovered on Monday morning at Dawraijhar village near Bogamati in India-Bhutan border under Baksa district.

The elephant was electrocuted, villagers said.

Villagers informed that an elephant herd had come down from the hills nearby in search of food and strayed towards the nearby villages.

“The poor elephant might have strayed out of the herd last night and entered the village. It was electrocuted as it tried to eat leaves from a nearby tree,” villagers said.

“High voltage wires pass over the trees and the elephant must have come in contact with one of these,” the villagers further added.

After the carcass was discovered in the morning, the villagers informed the Nagrijuli Police Out Post and Tamulpur Forest Range office.

Receiving the information, a team of Nagrijuli police led by ASI Prafull Brahma and a team of forest officials rushed to the spot and recovered the carcass.

The elephant was later buried by the forest officials.