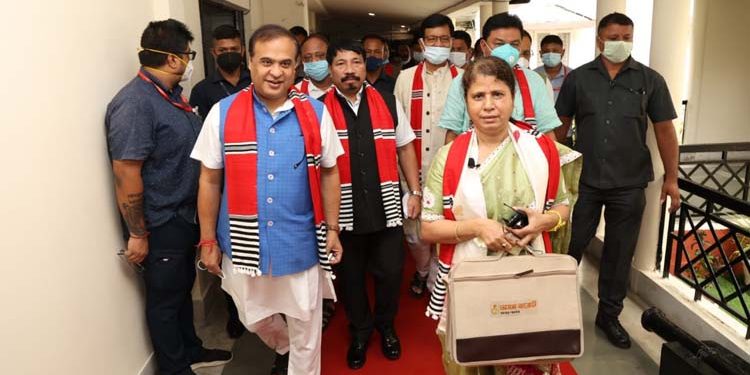 Ajanta Neog on Friday became the first woman finance minister of Assam, who presented the Assam Budget in the State Assembly.

Neog decided not to tax the public in her Budget.

In her speech, Neog said due to Covid19 pandemic and its impact on the economy, in the last fiscal, the Tax department’s collection declined to Rs 14,645 crore from Rs 14,967 crore in the previous financial year.

In her Budget speech, finance minister Neog said the state government has removed encroachers from 77,420 bighas of land in Garukhuti under Sipajhar block in Darrang district.

She said a committee has been formed under the leadership of MLA Padma Hazarika which will initiate agriculture activities in the encroachment-free area in Darrang district.

She said 134 Ecological Task Forces will be deployed by the Assam government for massive afforestation activities in the state.

Plans have been taken for introducing 2000 Gir cows.

An amount of Rs 9.60 crore has been allocated for the Garukhuti project.

To benefit distressed borrowers of microfinance loans, Rs 25,000 incentive has been announced for regular repayment of loans and maintaining good credit discipline under the Assam Microfinance Incentive and Relief Scheme (AMFIRS) 2021.

Under the scheme, the Assam government will clear overdue amount if payment is overdue by 1-89 days and
incentive of Rs 25,000 will be paid after restarting regular repayment.

Loans categorised as NPA to be disposed of with Rs 7500 cr State funds and Rs 4,000-cr benefit to be transferred by lenders.

The state government will fill up 1 lakh vacancies in various government departments.

According to the Assam Budget, the government will procure handloom items directly from indigenous weavers through ARTFED and AGMC.

Training will be provided for weavers for skill upgradation.

Sales counters will be set up in all Assam Bhawans, major airports and major cities, as proposed in the Budget.
E-commerce portals and applications to be leveraged to enhance sales.

One month each year will be observed as Orunodoi month while Orunodoi logo will be pasted outside the beneficiaries’ homes.

Monthly assistance in Orunodoi scheme has been increased from Rs 830 to Rs 1,000 per month.

The Assam government has prioritised the welfare of tea garden workers.

She has proposed a plan to provide piped gas supply to tea garden households, starting from upper Assam districts with a total target to cover 2,69,648 families.

As per the Budget, it has been planned to set up 1,000 model Anganwadi centres (ACs) across the state.