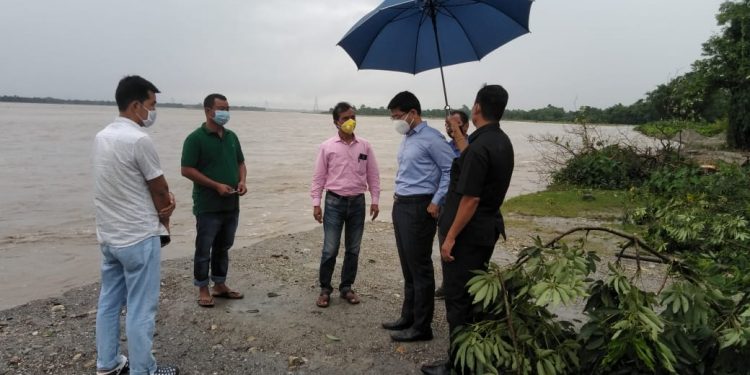 The principal secretary accompanied by the executive engineer of Water Resources spent the entire day overseeing relief and rescue operations including measures being taken by the departments concerned for the protection of flood, erosion, repairing of roads in view of restoring normalcy in the area.

The principal secretary visited Tulsijhara village near the Hagrama bridge where the Aie river is causing massive erosion.

Then he proceeded to Debargaon village for assessing the progress of protection works with repairing of existing embankments done by the water resources department and District Rural Development Agency.

He also took stock of the overall damages of Burijhar and its adjacent villages by visiting the affected site.

At last, he visited the Deosri area where the water resources department has been carrying out massive temporary erosion protection works as per the instruction of Deputy Commissioner, Chirang.

He later directed the executive engineer, Water Resources to prepare a detailed proposal based on the necessity of long term solutions to all these problems and to leave no stone unturned to take immediate measures for protection of people, government and private properties in this hour of crisis.

Visiting the flood affected, the principal secretary also assessed the steps being taken by the district administration for relief and rescue operation including distribution of ration and drinking water to the incumbents of flood ravaged areas as well as provision of silage, fodder and vaccination for the cattle.