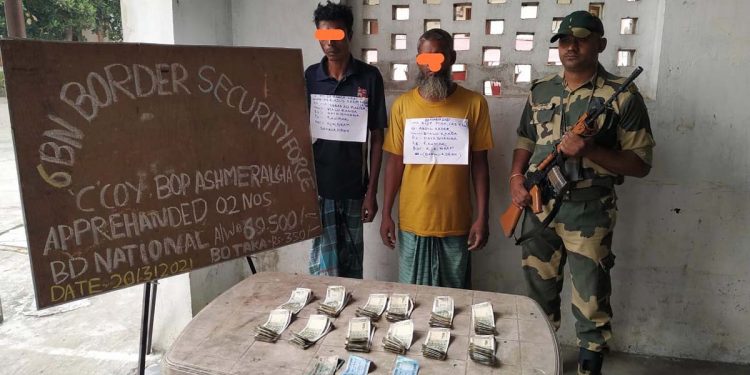 The apprehended Bangladeshi FICN racketeers have been identified as 38-year-old Rijaul Karim Aklas, son of Md Abbas Ali Master of Italukanda under Rowmari PS in Kurigram and 45-year-old Md Sujif Mia, son of Abdul Kadir of the same village.

Acting on a tip off, troops of BSF Border Outpost (BOP) Ashmeralga of 6 Bn BSF under Guwahati Frontier carried out a special operation at Ashmeralga village under Kharwabandha police station in Dhubri on Saturday.

During the operation, the BSF troops “apprehended two Bangladeshi FICN racketeers along with Rs 65,500 FICN, while these were being smuggled from Bangladesh to India”, the BSF said in a statement.

Apprehended Bangladeshi racketeers along with seized items have been handed over to Kharwabandha police station for further legal action, the BSF stated.