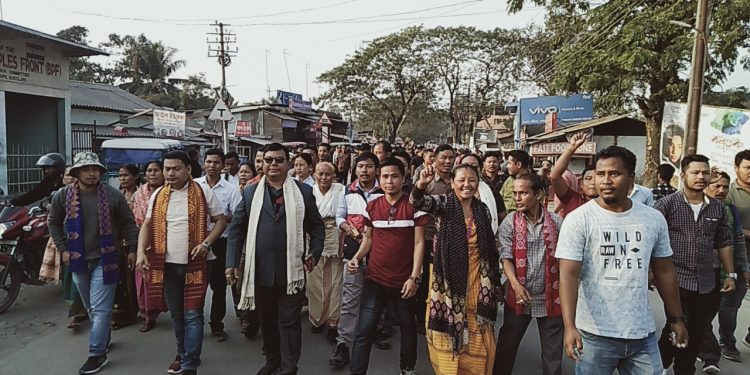 Jubilant people taking out a rally after the accord at Tangla town in Udalguri district on January 27, 2020. Image: Northeast Now

All is not well with the non-Bodos of Bodoland Territorial Council (BTC) after the Centre signed the third accord with the stakeholders of Bodo organizations.

The accord has renamed the BTC as Bodoland Territorial Region (BTR) and granting the region more administrative, financial powers and securing the socio-political, linguistic aspirations of the Bodos.

The non-Bodo organizations have expressed dismay over the fact that all non-Bodo stakeholders residing in the Bodoland Territorial Administrative Districts (BTAD) should have been taken into confidence and included in the peace talks and made signatories to the accord so that the rights of majority of non-tribals comprising nearly 75 per cent in BTAD could be secured.

Ibrahim Ali Ahmed, working president of All Bodo Minorities Students’ Union (ABMSU) said, “It is quite unfortunate that the non-tribal stakeholders and student organizations of BTAD region were kept in the dark by the Union and State governments and we were never intimated about the Memorandum of Settlement (MoS).”

He further said, “The previous BTC Accord of 2003 also promised that the non-tribal people will have equal rights in the region, but there were numerous instances where a diagonally opposite picture was in play.”

He also stated that if the rights of non-tribals are snapped it will never bring peace and normalcy to the trouble torned region.

Hanuman Jain, a businessman of Tangla town said, “We welcome the accord and the aspirations of Bodos must be fulfilled but it should not be at the cost of other non-tribal communities and mainstream people residing in the region for decades.”

Jitu Pathak a student said, “We are elated that the Bodos have achieved a greater level of autonomy in the region but the safety and security of the other non-tribal communities must also be shielded by the government.”

Rohen Chandra Brahma a resident of Udalguri said, “The accord have heralded a new dawn to the BTC region where there will be rapid progress, development and peace and only peace. There are various non-tribal and tribal communities and there must not be any apprehension among the minds of other communities as we will march towards development joining hand in hand.”

Sailen Kumar Sharma a senior citizen of Tangla town said, “The accord grants great powers to the Bodo community. However the government must also address the aspirations of the non-tribal and non-Bodo communities comprising majority as we cannot afford to live as second-class citizens in our own land.”

The jubilant people of Tangla town in Udalguri district comprising people from various caste, creed and community took out a rally throughout the town hailing the BJP-led government for the accord.