Taking a dig at the Congress, Home Minister Amit Shah said that time is high to “denounce the dividers” 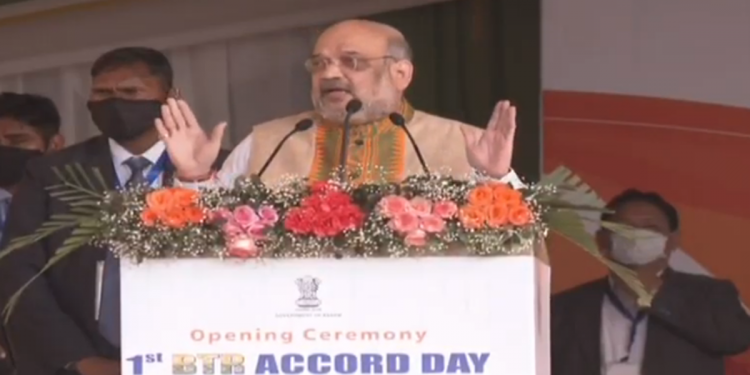 Taking part in a mega rally at Kokrajhar in Assam, to commemorate 1 year of signing of the historic Bodo Accord, Amit Shah has said that the ruling-BJP will safeguard the identity and culture of the Bodos.

Taking a dig at the Congress, Home Minister Amit Shah said that time is high to “denounce the dividers”.

“This rally is a reply to those who disturbed the peace in Assam by spreading venom in the name of Bodo and non-Bodo. Today, Bodos and non-Bodos both are present here,” said Amit Shah at the opening ceremony of first BTR Accord Day.

He also accused the Congress of letting blood-bath rule Assam during its long reign in the State.

Speaking on the signing of the Bodo Accord a year back, Home Minister Amit Shah lauded Prime Minister Narendra Modi for initiating the process to end insurgency in the Northeast.

“PM Narendra Modi initiated the process to end insurgency in the Northeast by signing the Bodo Peace Accord. 700 members of 8 armed groups have laid down arms,” said Shah.

“With the historic Bodo Accord, Prime Minister Narendra Modi has sent out a clear message – wherever there is unrest in the Northeast, negotiate and pave way for peace,” Amit Shah added.

Amit Shah further informed that the Centre has sanctioned an amount of Rs 500 crores for development of road connectivity in the Bodoland Territorial Region (BTR).

The Union Home Minister further informed that process is on for final resolution to the Bru-Reang settlement issue.

A sea of people turned up for the mega rally in Kokrajhar.

At the 1st anniversary of the historic BTR Accord in Kokrajhar. https://t.co/tOuCHA7MbA

At the 1st BTR Accord Day celebration with Union Home Minister Shri @AmitShah ji in Kokrajhar.#ShahWithAssamhttps://t.co/mymNETeRSv