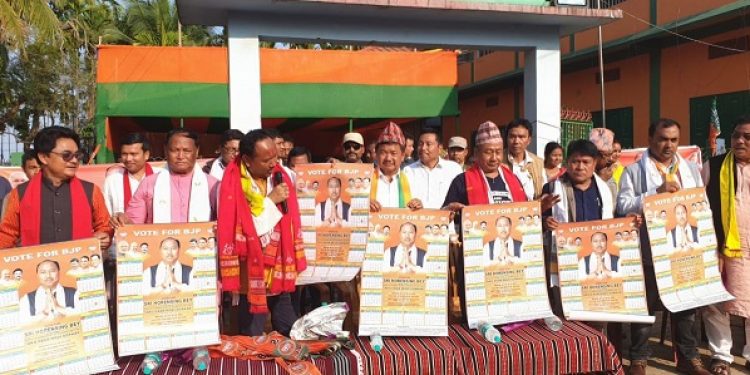 He expressed confidence that he will surely win as there is no competition.

At the welcoming ceremony at Dongkamukam, Bey said, “We have discussed this among ourselves and come to the conclusion that we will surely win. Our concern is to increase the percentage of winning. The Congress candidate has given up already as he has admitted in private that winning for him is forgone conclusion. Now, they have reduced themselves to counting the number of vehicles and people in a BJP meeting. We will create a record margin in our winning. Making me win is making Narendra Modi win. As about development you have seen with your own eyes.”

CEM Ronghang also expressed confidence that his party will win.

He said, “We will have to make BJP candidate Horensing Bey win by a huge margin. He will have to win for Autonomous State for which we have struggled for the last 33 years. For implementation of Article 244 (A) of the Indian Constitution I request Bey that he will speak about this in Parliament. Not once but every time the Parliament is in session. He (Bey) has promised that he will fight for autonomous state in Parliament. Memorandum of Settlement (MoS) and Memorandum of Understanding (MoU) are yet to be fully implemented and request that he will have to intimate the Centre time and again about it.”