Media workshop organized by PIB in cooperation with district administration 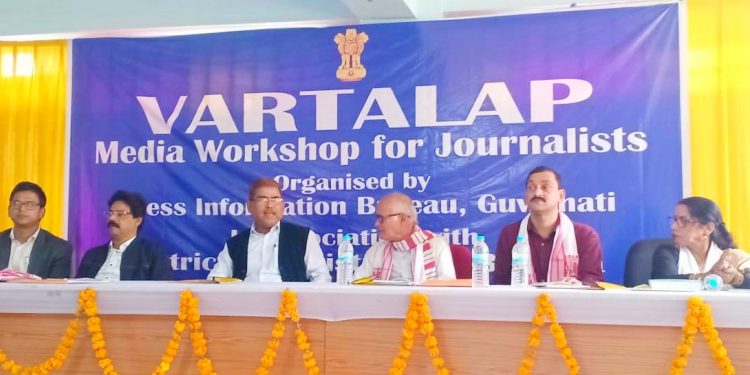 A day long media workshop was held at Barpeta of Assam on Tuesday.

The workshop was organized by the Press Information Bureau, Ministry of Information and Broadcasting, Government of India in cooperation with the district administration of Barpeta.

It was held at the seminar hall of District Agricultural office.

He appealed the media persons to give proper coverage in the implantation of government schemes so that target beneficiaries were not left out from the scheme.

He said though the district is at the top of the State in many departmental works but in respect it is lagging behind like immunization programme.

As many as 69 reporters representing various newspapers and news channel across the district took part in the seminar.

In his speech he also appealed the media persons to take anchor role in highlighting developmental schemes to the people of grassroots level.

Akshay Kumar Mishra, a senior journalist, writer, academician and social worker took part as a resource person in the workshop.

Nanju Dutta, president of the Barpeta Lekhika Samaroh Samiti taking part as a resource person laid stress on the equal development of woman and men for the greater interest of the society.

She also said that women are no less than man and ‘we should give equal importance to both’.

He asked the media persons to cooperate in the Mission Indradhanu to ensure 100 per cent immunization.

Atul Goswami, another resource person and executive engineer of Patacharkuchi Bhabanipur and Sarukshetri territorial division of PWD gave a short description with powerpoint presentation of various developmental works including SOPD programme and another programme in the district.

Another resource person Krishmna Kanta Pathak gave a brief description of the various schemes that were presently implemented in the district to boost the agricultural sector of the district.