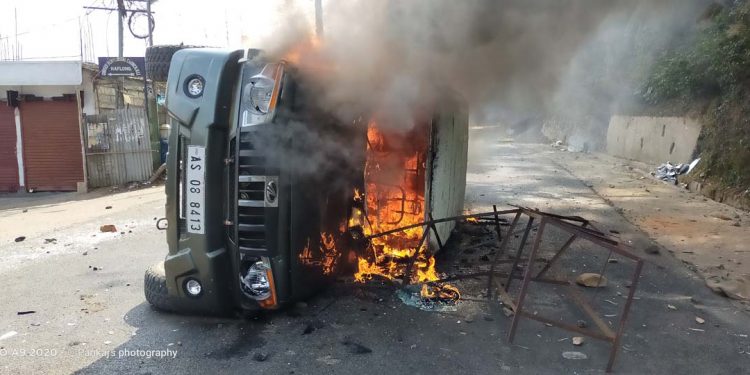 The supporters of indefinite Dima Hasao bandh called by the Indigenous Students’ Forum (ISF) torched a government vehicle and damaged a police vehicle in the district.

The Indigenous People’s Forum (IPF) called for indefinite Dima Hasao bandh with effect from 5 am on Tuesday demanding a separate autonomous district.

The situation in entire Haflong remained tense over the bandh call since morning on Tuesday.

A motorcyclist was also injured after being attacked by the bandh supporters.

At around 12 in the noon, the bandh supporters carried out the attack on the vehicle of Panchali Shyam, civil judge-cum-assistant sessions judge, Dima Hasao, at Mahdeb Tilla in Haflong.

Shyam’s personal vehicle was damaged in the attack.

The front glass of a police vehicle was also damaged in the attack by bandh supporters.

The bandh supporters also torched a government vehicle of the divisional forest officer (DFO) near the Synod Rotary in Haflong town.

Sources said, when DFO Ramen Das was returning to his residence on his official Bolero car after a meeting at the NC Hills Autonomous Council (NCHAC), he was forcibly unboarded from his vehicle.

After taking the key from the driver, the bandh supporters set fire on the vehicle.

Half an hour after the incident, Dima Hasao deputy commissioner Amitabh Rajkhowa and superintendent of police Bir Bikram Gogoi rushed to the spot.

The incidents have exposed the inactiveness of the police force.

Apart from the Haflong town, the bandh also had an impact on Mahur town.

However, as per reports, some business establishment and institutes remained open at Harangajao.

The train service was not affected by the bandh.

Two employees of the Information & Public Relations department were also reportedly injured after being attacked by bandh supporters.