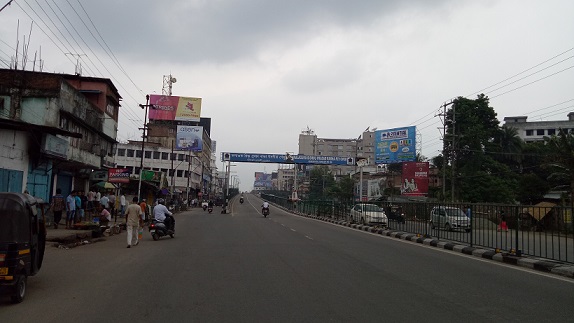 The deserted look of a road in Guwahati during Bharat Bandh called by Congress on September 10, 2018. Image - Northeast Now

The shutdown or economic blockade called by the political parties or organisations to pressurise the Government in order to meet their various demands has become a matter of concern as it affected the socio-economic growth and development of a State as well as a nation.

It may be mentioned that the Gauhati High Court banned bandh terming it unconstitutional and illegal (The Assam Prevention of Unconstitutional Bandh Act 2013) earlier following the Supreme Court’s verdict in Communist Party of India vs. Bharat Kr (19981 SCC 201) case.

The nationwide bandh called by the All India Congress Committee (AICC) on Monday in protest against the fuel price hike paralysed the normal life across Assam on Monday.

The lower section of the society including daily wage earners and street vendors were the most affected section during any bandh.

The city dwellers along with the rest part of the State suffered a lot on Monday due to the bandh called by the Congress.

Talking to Northeast Now, the chief PRO of the Northeast Frontier Railway, Jayanta Kumar Sarma said, “Such call for bandh adversely affects the lower section of the society most. Their one day’s earning opportunity has gone waste and that impacts economy as every working person adds to the economy by way of his / her earning. I won’t talk about salaried people who earn despite bandh and despite not producing anything during bandh.”

Besides, Sarma said the concept of ‘economic loss’ needs clarity.

Sarma further said, “People in Assam accept bandh because of the violence associated with it which is still fresh in our memory. Call for bandh or economic blockade cannot serve any purpose except helping the political parties or organisations to show strength and drum up support. Finding out alternate way to protest to meet the demands without hampering the normal life and economy is the need of the hour.”

Meanwhile, Gauhati High Court advocate Anupam Kumar Sarma, while opposing such call for bandh, said, “No one would dare to call for bandh in future if a strict Act is implemented to prevent it. Though there is an Act for prevention of unconstitutional bandhs, the implementing authorities are too weak.”

Lashing out at the political parties, advocate Sarma said, “No political party bothers about the poor section of the society. Whoever gains power displays same nature. Bandh makes the kitchens of the poor off.”

“The political leaders are concerned about increasing party funds, their allowances and various benefits and nothing else,” advocate Sarma said.

Terming bandh as the simple and easiest way to establish existence of any political party or organisation, advocate Sarma added, “Call for bandh is not the solution to meet demands. If bandh can solve any problem then AKRSU should receive Nobel Prize for calling 1000 hours bandh, which is a record call for bandh.”

Secretary general of NGO Aaranyak, Bibhab Kumar Talukdar, while condemning call for bandh, said, “One can protest by various meaningful ways without hampering the socio-economic growth and development of the nation. We won’t get back the time that we lose due to bandh.”