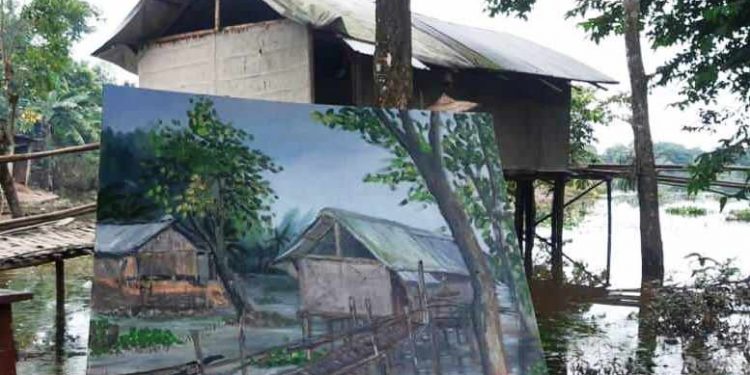 Silikhaguri, a village on the confluence of Subansiri and its tributary Somdiri under Azad Gaon Panchayat in Assam’s North Lakhimour Revenue Circle gets submerged by the rising levels of water of both the rivers every year.

The lack of road connectivity from rest of the district leaves the village to be marooned every year during flood.

Their just demands for a bridge over Somdiri have been falling on deaf ears of the concerned authorities for years.

This time too, Silikhaguri is marooned once again with entire village reeling under water.

To draw attention of the state authorities of the plight of No 2 Bhogman Silikhaguri, a group of young artists from North Lakhimpur has come forward in a unique way to create awareness and raise funds to provide some succour to the marooned villagers, situated less than 10 kms from the district headquarter.

Dikpal Lahon, a young artist and social activist led the initiative to bring artists to draw the plight of flood of Bhogman-Silikhaguri village on canvas.

They also launched an online campaign for the village which has been a state’s apathy for years.

The price of each painting was fixed at Rs 3000.

Four paintings were already sold on the spot.

The money received from selling the paintings would be spent in providing relief materials to the villagers, the organizers said.

It may be mentioned that the people of the Bhogman-Silikhaguri village lacks all minimum civic amenities like roads, pure drinking water and sanitary toilets besides having the annual ordeal of flood.