Commander of Invictus Brigade participated in the homage-paying function 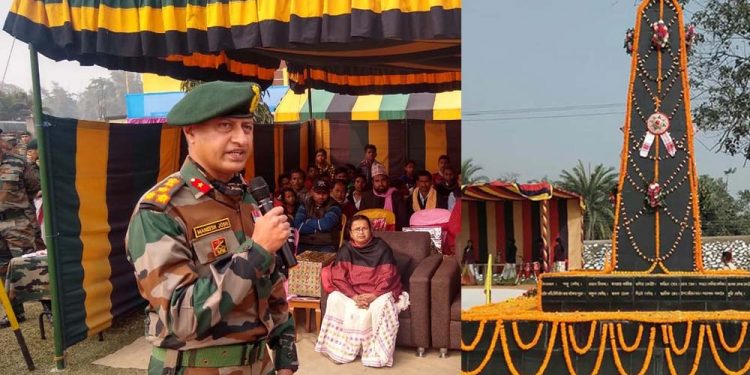 A view of the tribute paying ceremony at Patharighat. Image credit - Northeast Now

The Red Horns Division of the Army based at Chapai in Assam’s Darrang district paid tribute to the 140 martyrs of Patharughat Uprising on Wednesday.

The British police had gunned down 140 brave farmers (Krishak Swahids) during the historic Patharughat Uprising on January 28, 1894.

In this connection, a public function was organized on Wednesday at the campus of Krishak Swahid Memorial Park at Patharighat, 20 km from Mangaldai.

The Commander of Invictus Brigade participated in the homage-paying function as the chief guest and offered floral tributes in full military-style while senior journalist Bhargab Kr Das was present as the appointed speaker on the occasion.

Earlier on Tuesday, the 126th edition of the Krishak Swahid Divas was observed by both the state government and the public.

The Darrang district administration on this occasion organized a function to pay floral tribute to the martyrs at the memorial tomb, besides a public meeting, exhibition and distributed tractors among the farmers.

The Darrang AASU in association with local socio-cultural organization Pathoru Samannay Gosthi also paid homage to the martyrs at Pathorighat.

The president of Darrang AASU, Khanindra Rajbongshi and central executive member Arup Kalita were the senior AASU leaders who participated in the programme.

Darrang District Krishak Sangha, a premier farmers’ body of the district, also observed the divas at Panbari village along the Darrang-Udalguri border.

Addressing the village farmers, Adip Kr Phukan said every year, an average of 12,000 farmers commit suicide in India and under the regime of Prime Minister Narendra Modi-led BJP government at the Centre the situation is even worse.

Explaining the pitiable condition of India’s farmers, Phukan said the average monthly income of a farmer in the country is still only Rs 3,000.

He strongly criticized the Modi government alleging pro-corporate attitude in the name of farmers’ beneficiary schemes like the PM Fasal Beema Yojana.

Phukan urged the farmers’ community to remain united recalling the ideology of the farmers’ rebellion of Pathorughat and also to raise voice united for their justice.