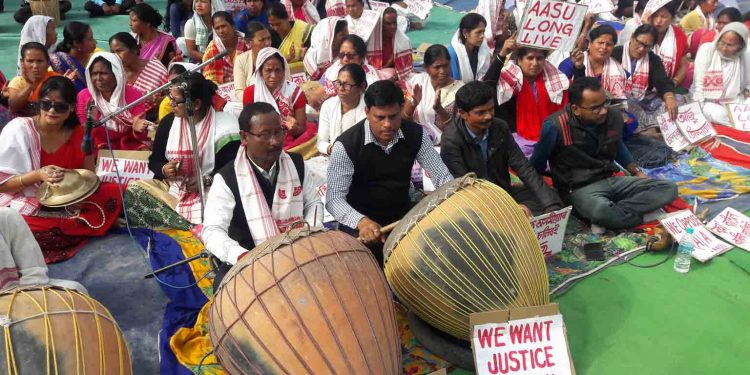 The sound of Assamese folk musical instruments resonated the Tangla air on Thursday as hundreds of anti-CAA protesters participated in Ransinga.

Ranasinga is a cultural protest launched by the All Assam Students’ Union (AASU) along with the artists’ fraternity across Assam against the Citizenship (Amendment) Act (CAA).

As a part of Ranasinga, people have been urged to come out with any folk musical instrument and play it protesting CAA.

AASU assistant general secretary Jayanta Kumar Bhattacharya said, “Ranasinga is an effort to make the Centre and the state government realise regarding CAA, which the people of Assam have been opposing vehemently.”

“The government should realise CAA is detrimental to the indigenous people,” he said.

“We will never bow down before the communal forces of Delhi and Nagpur and we will not accept CAA at any cost,” he reiterated.

Tangla AASU president Pranjal Deka said the Act has engulfed Assam in a cloud of darkness and uncertainty.

“Everyone who loves Assam must come forward and protest against CAA,” Deka said.

“The Assamese people have been betrayed. Every voter must vote wisely in the forthcoming polls and overthrow the BJP government,” Deka reiterated.

“The people have understood the divisive politics of the government,” he further added.

“But it is unfortunate that he has lost his voice and is acting like a puppet of Delhi and Nagpur-led forces,” he added.