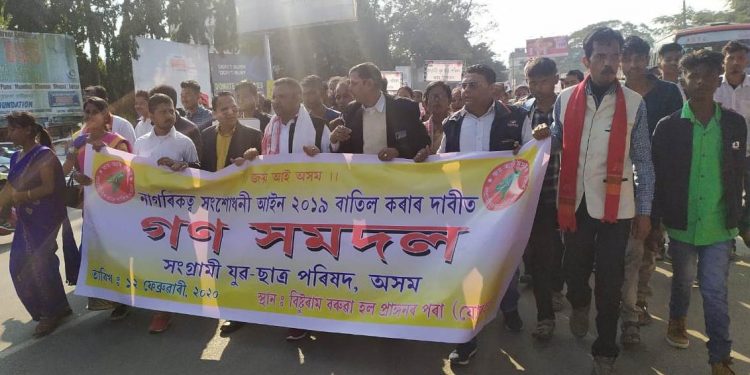 The rally began from the Bisturam Barooah Hall and ended in front of the Deputy Commissioner's office in Jorhat.

Protest against the Citizenship (Amendment) Act 2019 continues in Jorhat with the Sangrami Yuva Chatra Parishad, Assam taking out a rally against the contentious Act on Wednesday.

The protestors carrying banners chanted slogans against the Centre and State governments and against leaders of the BJP.

The rally began from the Bisturam Barooah Hall and ended in front of the Deputy Commissioner’s office complex here.

The Citizenship Amendment Bill which subsequently became an Act has witnessed protests in Assam and other Northeast states since December.

In Assam the Act is perceived as a threat to the identity of the people here as it proposes to give citizenship to Hindus, Sikhs, Christians, Parsis who have faced religious persecution in Bangladesh, Pakistan and Afghanistan.

Assam, already swamped by a huge Bangladeshi illegal migrant population including Hindu Bangladeshis is apprehensive that if granted citizenship the influx would increase resulting in the Assamese becoming a minority in their own land.