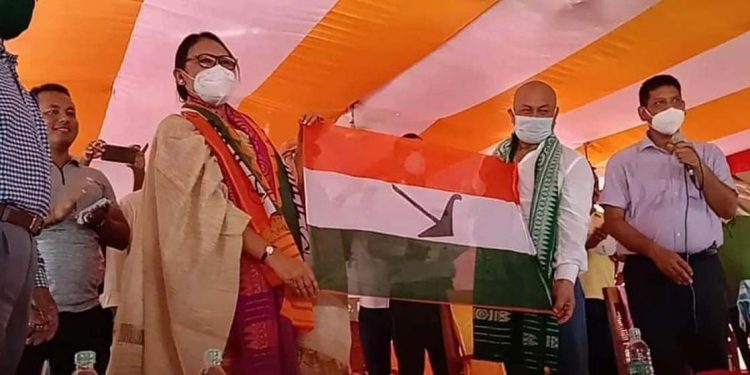 Former president of Boro Women Justice Forum (BWJF), Anjali Daimari on Monday formally joined the Bodoland People’s Front (BPF) giving a boost to the party ahead of the BTC polls.

Daimari joined the party in a grand ceremony held at Udalguri where BPF president Hagrama Mohilary welcomed her with open arms.

Speaking on the occasion, Daimari said that she has joined the party to serve the people and after being inspired by the ideology of BPF that believes in equal development of every community.

Talking to media persons, BPF president Mohilary said, “The 3rd Bodo Accord will create rifts among the Bodo and the non-Bodos and it will diminish the Bodo community as it has no special provisions.”

Mohilary also claimed the BPF will secure 30 out of 40 seats and will form the government in the council.

Daimari’s foray into politics is expected to shape up the dynamics of the Bodo belt ahead of the ensuing Bodoland Territorial Council (BTC) polls.

Pertinently, Anjali Daimari is the sister of the founding chairman of now-disbanded NDFB, Ranjan Daimari.

Ranjan Daimari has been lodged in jail after being sentenced by a special court along with nine others to life imprisonment for their roles in the deadly October 2008 serial bomb blasts which killed 88 people and injured 540 others.